In a room full of blue scrubs and drapes, orthopedic surgeons Brad Adams and Charles Weeks concentrated on their first surgery of the day - a total knee replacement - as overhead lamps bathed the exposed joint in bright light.

At the head of the operating table, an anesthesiologist tended to the woman's vital signs and, near the foot, a surgical technician presided over several tables of scalpel, clamps, hemostats and prosthetic components. 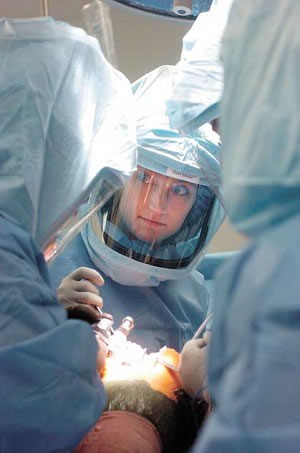 Right in the thick of the action was Greta Miracle, an intern from Oregon Health & Science University who used a retractor to keep the joint fully exposed as the surgeons installed a brand-new titanium knee.

The job gave Miracle, one of three PA students studying in Pendleton, a front row seat to some interesting surgical techniques.

A physician assistant, or PA, isn't a doctor, but does many of the same things. A PA can perform physical exams, diagnose and treat illnesses, assist in surgery and perform other functions - the same as a physician.

Pendleton is one of a number of locations where OHSU sends its PA students during their second year of study. The year is jammed with seven five-week rotations to different practices around the state, two elective rotations and one 10-week preceptorship.

Miracle and two other OHSU students, Anna Urbanc and Troy Bainbridge, are on their fifth. They moved into a house near St. Anthony Hospital for five weeks of intensive study in separate practices. Urbanc is working with Dr. Juliet Markham. 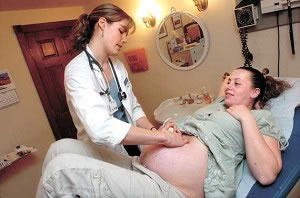 "The lowly PA is probably the last to see the patient," she said, laughing. "In a rural setting, you're going to be in there doing it all and most of us learn better by doing, not watching."

Local physician assistant Cesario Texidor contacted OHSU in 2006 about bringing PA interns such as Miracle, Urbanc and Bainbridge to the northeast corner of the state.

"We just didn't have any PAs here," he said. "Hopefully, we can entice some of them to stay."

Urbanc, originally from Colorado, said a rural practice is in her future.

"I would like to practice in a small town - either in Colorado or Oregon," she said. "Oregon has some very nice tax incentives to stay here."

The tax credit is worth $25,000 to PAs who work in an underserved rural setting.

Bainbridge is in his second Pendleton rotation, spending five weeks with Adams and Weeks the first time around. He also spent time in Vancouver with a pediatrician, in Scappoose at a women's health clinic and other rotations in Salem, Bend and at OHSU.

Bainbridge also in torn about what he will end up doing, though he's attracted to family medicine.

"It's a smattering of everything," he said.

Weeks said most PAs who've come through his office don't have their area of interest nailed down. He's just happy to give them a taste of surgery.

"Physicians are teachers at heart," Weeks said. "I think for many of us, it's something that comes naturally."

Markham said she hosts interns in a quest to give back to her profession.

"Teaching's important for a physician to do," she said. "It's a way to give back to the medical community."

Posted with permission of the The East Oregonian.