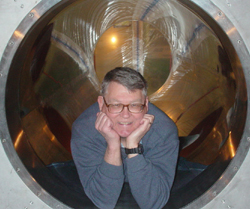 Charles Springer, Ph.D., and multi-disciplinary collaborators are developing a new breast cancer screening method that can reduce or eliminate unnecessary biopsy surgeries. Their findings were published in the November 18 issue of the Proceedings of the National Academy of Sciences.

“While standard mammography is effective, it also results in a very significant fraction of false-positive results,” said Dr. Springer, director of the OHSU Advanced Imaging Research Center. Dr. Springer also is Professor of Physiology and Pharmacology, and of Biomedical Engineering, and a member of the OHSU Knight Cancer Institute.

As reported in PNAS, the pharmacokinetic analysis of dynamic-contrast-enhanced (DCE) MRI data yields two distinct parameters that independently measure the capillary wall contrast dye molecule transfer rate. In the most common analyses of routine DCE-MRI, each of the two parameters exhibited considerable overlap for benign and malignant lesions from 22 patients with suspicious breast lesions initially ruled positive by institutional screening protocols. However, use of the shutter-speed model for the same group of 22 patients was able to distinguish between the 15 benign lesions and seven malignant lesions based on these transfer rate constants. The complete (blinded) discrimination between the lesion types was validated by comparison with subsequent gold-standard pathology analyses of biopsy tissue samples.

“Typically, 75 percent of mammographically-indicated biopsies yield negative pathology results, meaning that an intermediate step such as an MRI determination could greatly reduce the number of, if not completely eliminate, unnecessary biopsy surgeries,” said Dr. Springer.

A second paper published in the same PNAS issue provides increased detail and physicochemical principles underlying the shutter-speed model and the data analyzed by this software, which allows malignant tumors to be so well-distinguished from benign tumors. The new model correctly accounts for the speed of water molecule interchange between tissue compartments. It is a remarkable discovery, says Dr. Springer, that the latter process, though essentially identical in malignant and benign tumors, becomes influential in the analysis of data from only malignant lesions (due to increased dye vessel permeation). These basic principles are not restricted to just breast cancer, or even to just cancer.

Other collaborators on this research are Elizabeth Morris, M.D., and Ya Wang, M.S., at Memorial Sloan Kettering Cancer Center; and Venkatraman Seshan, Ph.D., at Columbia University. This work began some years ago, when Springer, Huang, Li, Tudorica, and Rooney were at Stony Brook University (and Brookhaven National Laboratory), both on Long Island. Before coming to OHSU, Huang moved to MSKCC and Weill Cornell Medical College, with Columbia in Manhattan.

Since the PNAS papers were written, the researchers have more than tripled the size of the study population. Preliminary analyses indicate that the high discrimination is maintained. A report on this expanded investigation is being prepared for submission.