At the recent luncheon for the Frank Doernbecher Guild, members learned about a fund-raising phenomenon that's mobilizing a new generation of donors. This year's luncheon highlighted Kids Making Miracles, a fund-raising program that started nearly two decades ago as a coin drive at an elementary school. Since then, hundreds of K-12 students at schools throughout the region have helped the Kids Making Miracles (KMM) program raise more than $5.4 million for Doernbecher Children's Hospital at OHSU. 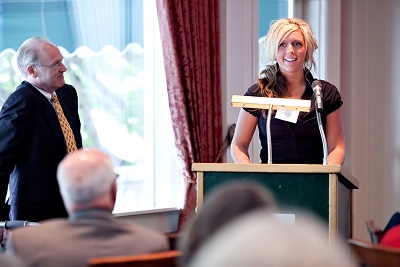 Myron Child, Doernbecher Foundation board member and founder and chair of the
Kids Making Miracles program, listens as Teddie Garland tells her story.

At the age of 8, Teddie Garland was treated at Doernbecher for cholesteotoma, a benign tumor of the middle ear cavity. Over the course of three years she underwent a total of seven surgeries, five to remove the tumor and two to restore her hearing.

Teddie became involved in Kids Making Miracles after learning about the program at the Oregon Association of Student Councils (OASC) conference when she was in junior high. She continued to participate in KMM as a high school student at Clackamas High School. Teddie acted as the co-chair for the Kids Making Miracles Executive Council for two school years (2006-07, 2007-08) and she remains an avid supporter of Doernbecher today.

View more photos from the event on the Doernbecher Foundation website.

The Frank Doernbecher Guild honors individuals who have established gift plans benefiting Doernbecher Children's Hospital. For more information about joining the guild, please email pginfo@ohsu.edu or call 503 228-1730 and ask to speak with a member of the gift planning team.