From the Archives: The "modern hospital" surgery in 1948 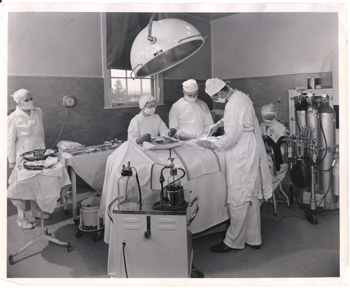 One look at this photo through modern eyes and we see only the primitive conditions available in the operating rooms of Multnomah County Hospital during the middle of the 20th century. However, at its printing, this image was intended to display the opposite. A newspaper caption glued to the back of the photo reads: "The modern hospital surgery exemplifies utmost in sterile equipment, in contrast with the old. Every precaution is taken to prevent complications during operation. Latest technical skills are being used by medical profession in co-operation with hospital aids to insure patient's recovery."

The photo print is stamped "May 9, 1948," and bears in addition the stamps of the photographers, Photo-Art Commercial Studios, and the university's Office of Public Affairs. "New No. 1" has been written on back in ink, and in pencil, "Dr. Nadal." The surgeon is Joseph Wyckoff Nadal, Sr, MD, who joined the school in 1944 as a clinical associate in surgery and volunteered on staff for over 40 years. He was a founding member of the Portland Surgical Society, chief of surgery at St. Vincent Hospital, and longtime partner at the Portland Clinic.

As early as 1944, Dean David Baird had proposed the construction of a new teaching hospital to augment the aging county hospital facilities, but the Medical School Hospital (as OHSU Hospital was first known) would not be dedicated until March 3, 1956.