From the Archives: West portrait by Dotter 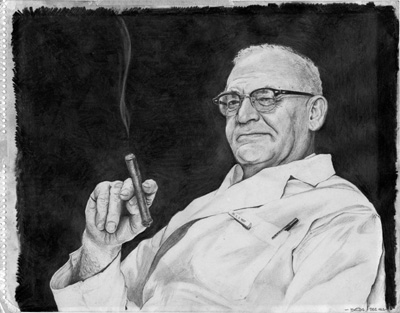 This pencil portrait of E.S. West, MD, PhD, is more than just a lovely sketch of a prominent former faculty member of the School of Medicine. It is also an example of the wonderful artistic skills of another prominent faculty member: Charles Dotter, MD.

Edward Staunton West (1896-1988) chaired the Department of Biochemistry at the Medical School from 1934 to 1966. With Wilbert Todd, PhD, he wrote a Textbook of Biochemistry which quickly became the standard text; it went through four editions from 1951 to 1966. West was one of the original PIs on the grant for the Oregon Regional Primate Research Center, longtime chair of the admissions committee, and originator of the campus' noontime horseshoe matches.

Charles Theodore Dotter (1920-1985) was chair of the Department of Diagnostic Radiology at the medical school from 1952 until his death in 1985, and is widely considered the father of interventional radiology.

This sketch hung for many years in the office of the Biochemistry chair until it was donated to the archives by Richard T. Jones, MD, PhD, in June 2006. Richard Theodore Jones (1929-2008) was chair of the department from 1966-1993 and Acting President of University of Oregon Health Sciences Center, 1977-1978.