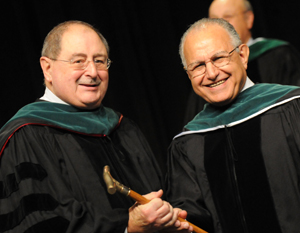 Emil J. “Bud” Bardana Jr., M.D., Professor, Department of Medicine in the Division of Allergy and Clinical Immunology is the recipient of the American College of Allergy, Asthma & Immunology’s Gold Headed Cane Award for 2009.

Awarded only to one physician in the country each year, Dr. Bardana was chosen for this honor by the fellows of the College for demonstrating the highest standards of scientific excellence and integrity while serving as a Fellow of the College for at least 20 years.

The son of Italian immigrants, Dr. Bardana was educated in public schools and later at LaSalle Academy in New York, where discipline and high academic standards turned the streetwise kid into the school’s valedictorian. At the same time a local physician befriended him.

“Dr. Marius Carissimo let me hang out in his office, and at the end of the day we’d have a cup of espresso and talk about his patients that day,” said Dr. Bardana. “When I graduated from high school he bought me a Grey’s Anatomy, and I still have it.”

Dr. Bardana has been a faculty member in the School of Medicine since 1971 and has focused his research on the effects of exposure to environmental chemicals and building-related illnesses. That research and other similar studies began to create widespread interest in air quality health issues, and led to his co-authorship of the textbooks Occupational Asthma and Indoor Air Pollution and Health, as well as over 200 other published works. He plans to retire from clinical practice at the end of the year.