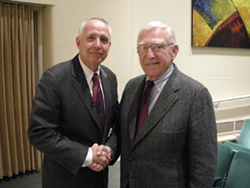 Darrell Kirch, MD, President of the Association of American Medical Colleges (AAMC), spoke about health care reform and the role academic health centers can play in catalyzing transformational change in the 21st century.

Speaking to nearly 300 students, faculty, staff and guests at the OHSU auditorium, Dr. Kirch cautioned that while President Obama may soon sign a health care reform bill, there will still be fundamental work needed to improve our nation's health care system. He emphasized the "culture" of academic medicine – the good and the not-so-good – and noted that he observed a current cultural inertia that may be inhibiting progress toward improving our health care system.

He expanded on the themes of an address he made to the 2007 AAMC annual conference in which he said, "The dilemma for academic medicine may very well be that while higher education and health care have held fast to their traditional individualistic culture, the world has fundamentally changed."

In an age of complex science, he argued that the necessary focus in academic medicine on collaboration between individuals and groups to solve complex problems will depend on building better connections between departments, and between the clinical and academic enterprise. 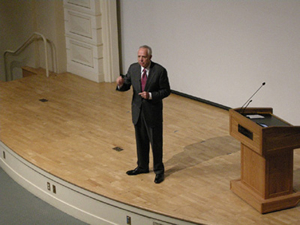 Referring to the process as "heavy-lifting," Dr. Kirch said that changing the culture in academic medicine will require courage, including a rethinking about traits of good leaders. Instead of relying on a candidate's curriculum vitae as the primary source of qualification, he urged academic medicine to also consider a candidate's emotional intelligence, a capacity to be trusted and an ability to build coalitions. "The institutions that will show us all the way in the next few years will be the places with the highest level of shared courage," he said.

Looking forward, the possibilities are exciting for academic medicine, he said. For example, the AAMC supported legislation that would advance health system change by establishing federal Healthcare Innovation Zones, or HIZs. This legislation would support partnerships between academic health centers and their communities to test innovative approaches to health care delivery.

Dr. Kirch said he saw OHSU and Oregon as having many of the necessary "pre-conditions" needed to successfully establish an HIZ and/or lead the country in academic and clinical innovation in other ways. The pre-conditions included, for instance, a state with only one academic health center (precluding competition between institutions), a state that has a history of health care innovation, an engaged community, and the fact that OHSU is already making progress at transformational change, such as clinical integration.

During his (first) visit to OHSU, Dr. Kirch also met with the Executive Leadership Team, and with School of Medicine leadership, including the dean, associate deans and chairs.

Pictured: Dr. Kirch in the OHSU auditorium addressing the audience and with Walt Meihoff, MD, Class of 1959, President, School of Medicine Alumni Association after the lecture.