From the Archives: Back to 1906 and Portland's first internist - Noble Wiley Jones 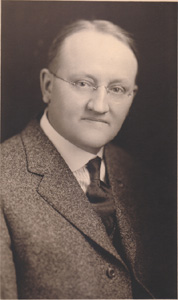 A 1901 graduate of Rush Medical College, Noble Wiley Jones, MD, settled in Portland in 1906 on the advice of onetime Portland surgeon and Rush faculty member A.D. Bevan, MD, becoming the city's first recognized specialist in internal medicine. Jones joined the University of Oregon Medical School (the precursor to the OHSU School of Medicine) in 1913 as a Clinical Associate in Medicine.

He brought to the School of Medicine faculty not only his advanced training in medicine and pathology, learned in the great schools of Vienna, Berlin, and Oxford, but also a commitment to clinical research and academic excellence. With Frank Menne, MD, and Olof Larsell, PhD, Jones wrote the 1941 report which led to the creation of the Medical Research Foundation. He wrote or co-authored over 50 publications on topics from coronary disease to dyspepsia to pyorrhea. Howard P. Lewis, MD, summed up Jones' contributions by calling him "one of the most important of the group of men who worked so hard to advance the fortunes of the University of Oregon Medical School."