Message from Dean Richardson: May you live in interesting times 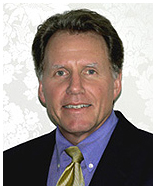 Recently, I was struck by two important news items. The first was a study that rigorously evaluated OHSU's economic impact to Oregon and found it totaled nearly $4 billion annually. Along with that, we're responsible for some 35,000 jobs – at OHSU and in the community. The report also noted that for every $1 Oregon spends on OHSU, the state receives a return of $100 in economic impact. That's impressive – not only are we meeting our public missions, we are doing so while serving as a critical economic resource for Oregon.

The second was media coverage about the state's challenging budget forecast. According to projections, our state will face billion dollar shortfalls for the foreseeable future without federal help. Oregon is not alone in its revenue predicament; many – if not most – states face a sobering forecast as they continue to weather the economic downturn. In response, news reports suggest that states are looking for ways to decrease public services or to reconsider how services are delivered and funded.

The state's challenging fiscal forecast is another fundamental structural shift in a rapidly evolving external environment affecting the missions of academic medicine. Of late, I find myself thinking of an often-quoted but poorly sourced line: May you live in interesting times. Some see it as a blessing, others as a curse. But one thing is clear: across the nation, medical schools are all adapting – some faster than others – to these "interesting times."

In the OHSU School of Medicine, I know we are at the leading edge of this adaptation. Our faculty is deeply engaged in health care reform – at the state and national level – as well as within our own health care system with delivery innovations and clinical partnerships. We are moving toward our goal of developing interprofessional educational models to support team-based health care delivery. We are looking ahead to anticipate and respond to the National Institutes of Health future funding priorities; already, our faculty is engaged in transforming aspects of our research mission and culture to enhance collaborative science.

Adding to the "interesting times" of academic medicine is now a likely shift in how states interact with and support public institutions, at least as the economic challenges of the past year continue to exert influence. In this context, this new independent study is even more important in demonstrating the foundational role of OHSU in the Oregon economy. President Robertson described the specifics of the study results in his DirectLine newsletter and I encourage everyone to also read the study itself (see links below).

Please spread the word about OHSU's exceptional contribution to Oregon's economy. It's one more thing – in addition to our public missions of education, research, health care and service – of which we all can be very proud. In these interesting times, it's up to all of us to promote understanding of the impact of our missions.