From the Archives: Is that a washing machine or an artificial kidney? 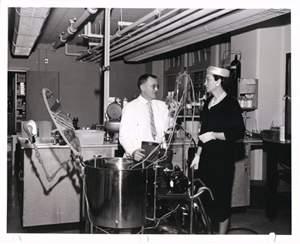 In the fall of 1958, pathologist Raymond Grondahl, MD, played host to the President of the Progressive Business Women's Club of Portland, Mrs. Orville H. Fisher. What might have looked like a washing machine to her was in fact a Travenol artificial kidney, the first commercial artificial kidney used at the School of Medicine. (If she had mistaken it for a washer, she would not have been far wrong: the Travenol was originally designed using a standard Maytag machine as its tank.)

A fund for purchasing the medical school machine was started in 1954 by employees of Tektronix in honor of executive Lawrence Vollum, who died of carbon tetrachloride poisoning. It is rumored that the first artificial "kidney" used at OHSU was an ad hoc apparatus cobbled together for a patient who had gone into shock after surgery in 1956. This "homemade" device was used for about a year before the Travenol was acquired.