OHSU respects the work of the Oregon Court of Appeals, but disagrees with its ruling in the Ackerman case and will appeal this decision to the Oregon Supreme Court. The ruling has implications for OHSU and for all public bodies.

It is important to remember that today’s decision pertains to the appropriateness of an award on a claim made before the new tort cap was enacted.

This decision underscores the importance of the 2009 Legislature’s passage of a new tort cap. The new cap reflects the balance between personal remedies and maintaining critical public services that the Legislature, acting on behalf of Oregonians, feels is appropriate.

Since passage of the new tort cap in 2009, OHSU always has assumed that ultimately the Oregon Supreme Court would review issues raised by the new law.

We remain proud of the high-quality care that OHSU provides. Our patient safety and quality assurance program has consistently resulted in good outcomes that are at or above state and national averages.

OHSU’s mission is to provide leading-edge health care that improves the well-being of all Oregonians. OHSU will remain steadfast in its commitment to its patients and in its support for its faculty, students, nurses and all those who provide clinical care. 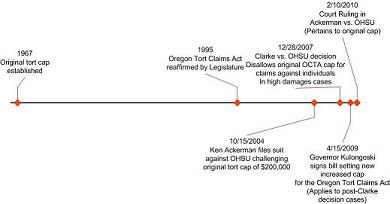 Background on Ruling
Ken Ackerman is a former Portland news anchor with KPTV-TV and KATU-TV. In April 2004, Mr. Ackerman filed a lawsuit against OHSU following neck surgery. The case went to trial in the summer of 2006. At the conclusion of that trial, a Multnomah County jury awarded the defendant $1.4 million in damages. However, because the case occurred while the original Oregon Tort Claims Act (established in 1967) was in place, OHSU’s liability was limited to $200,000.

OHSU appealed those decisions to the Oregon Court of Appeals and that court in its ruling on Feb. 10, 2010 found that OHSU and OHSUMG (which has since been integrated into OHSU) were each liable for $200,000 under the previous cap, and that judgment for the remainder of the damages could be entered against the involved physician. OHSU is obligated by law to indemnify the individual physician for this damage amount.

Previous Story From the Archives: Is that a washing machine or an artificial kidney? Next Story January Paper of the Month: Unraveling the genetic basis for excessive alcohol consumption