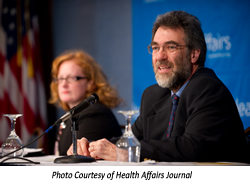 The peripatetic William Hersh, MD, Professor and Chair of the Department of Medical Informatics and Clinical Epidemiology in the OHSU School of Medicine, has been on the road again spreading the word on biomedical and health informatics. In January, Dr. Hersh did a two-week swing through Asia, with stops in Hong Kong, Singapore and Bangkok. He led a two-day seminar on health informatics in the Hong Kong Hospital Authority, which is developing a universal electronic health record for all of Hong Kong’s public hospitals. In Singapore he ran an offering of OHSU’s 10x10 distance learning informatics course with Dr. K.C. Lun, former president of the International Medical Informatics Association and CEO of Gateway Consulting, which drew a regional audience, including participants from the Singapore Ministry of Health. In Bangkok he delivered a talk on informatics to the dean and clinical department chairs of the Ramithibodi Hospital Faculty of Medicine of Mahidol University. He also attended the Prince Mahidol Award Conference, a global health conference, where spoke on informatics workforce development.

In mid February, Dr. Hersh was a featured participant in a panel discussion at the National Press Club in Washington, D.C., about the promise that health information technology offers the developing world. The event was sponsored by Health Affairs, the widely respected health policy journal, and moderated by Susan Dentzer, the publication’s editor-in-chief and frequent guest commentator on the PBS Newshour with Jim Lehrer. The discussion followed publication in the February issue of Health Affairs of a paper “Building A Health Informatics Workforce in Developing Countries” that was authored by Dr. Hersh and colleagues from South America.

“One thing I have definitely learned in my countless interactions with friends, colleagues, and others in Europe, South America, Asia, Africa, and elsewhere is that the principles of informatics apply no matter where you are on the planet,” Dr. Hersh wrote in his “Informatics Professor” blog (http://informaticsprofessor.blogspot.com/). “There are indeed global truths in the informatics field, just as there are in medicine… I have also come to learn in this journey that there is a global need to build human capacity in informatics.”

The reach of information and communication technologies in the developing world, via both Internet access and mobile phones, is increasing exponentially, he and his colleagues reported in the Health Affairs paper. These applications “hold vast promise to improve global health,” they wrote. However, the size and skills of the workforce to lead the implementation of these technologies have not kept pace, they added.

Dr. Hersh’s latest burst of globe-trotting capped off a momentous year in medical informatics, which saw the passage of the Health Information Technology for Economic and Clinical Health (HITECH) Act, a component of President Obama’s economic stimulus package. Dr. Hersh worked with Rep. David Wu and Sen. Ron Wyden to help craft the section of HITECH legislating support for health IT workforce development. “This is a defining moment for the informatics field,” Dr. Hersh said. “Never before has such money and attention been lavished on it.” He agrees with those who say that there may well end up being more “reform” and transformation of healthcare as result of HITECH than anything that emerges from the broader healthcare reform measures that have gotten bogged down in partisan squabbling.