The OHSU-Vertex Educational Partnership Program, established in 2007, offers $35,000 scholarships funded by Vertex Pharmaceuticals, a biotechnology company based in Cambridge, Mass. Each award funds a student's stipend and fees for one year. 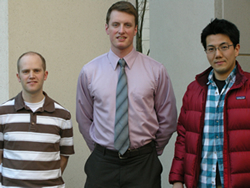 "The Vertex program is an important unencumbered gift to the university and a huge honor for the students who win the awards. We received an exceptionally large number of applications from outstanding and interesting individuals with much to contribute to science," said Allison Fryer, PhD, Associate Dean for Graduate Studies.

Hayashi is investigating the metabolism of nitric oxide, an important signaling molecule which plays a key role in the cellular defense against microbial pathogens. Using spectroscopy, he is looking, specifically, at two particular families of enzymes involved in this process. Hayashi’s fascination with science began as a child in rural Japan where he chased butterflies and collected small insects. He was struck by the analytical power of spectroscopic tools in gaining an understanding of the chemistry of nature as an undergraduate student in biotechnology at Tokyo University of Agriculture and Technology. Hayashi’s mentor is Pierre Moenne-Loccoc, Associate Professor, Division of Environmental and Biomolecular Systems, Department of Science and Engineering.

Stafford is studying the neurobiological mechanisms by which rodents with fear-related psychiatric disorders that are treated with histone deacetylase inhibitors translate into reduced fear and anxiety. HDAC inhibitors hold promises, he believes, as a potential therapy for human disorders with common underlying learning and memory deficits such as post-traumatic stress disorder, depression, schizophrenia and drug addiction. He is working under the tutelage of his mentor K. Matthew Lattal, PhD, Assistant Professor in the Behavioral Neuroscience Department. An Eastern Oregon University graduate, Stafford, like Hayashi, has been passionate about science since childhood. “Why do I feel like a kid opening birthday presents whenever I get the results of a new experiment? Maybe it’s a genetic thing.” His ambition is to translate his research into viable mental health therapies and diagnostic tools through the generation of university-based biotechnology startups. To that end he is participating in the Technology Entrepreneurship Certificate Program offered jointly by OHSU and the Pamplin School of Business, University of Portland.

Stoffregen is completing genetic and molecular research on a defect in chromosome replication timing that appears to be common in cancer cells and may be implicated in the genetic instability that is a hallmark of cancer. After earning his undergraduate degree in biology and psychology at California Lutheran University, he worked for four years as a research assistant in the lab of Brian Druker, MD, on projects aimed at developing what might become “the next Gleevec®,” the spectacularly successful medication Dr. Druker helped develop to treat Chronic Myeloid Leukemia. Like the other Vertex Scholars, Stoffregen contracted the science bug early. At the age of eight, he began spending endless hours researching the world around him through the lens of a microscope that fulfilled a Christmas wish. He has been indulging that curiosity ever since.

Vertex, with a market capitalization of more than $7.2 billion, is committed to the discovery and development of breakthrough small-molecule drugs for serious diseases. Its current product pipeline is focused on viral diseases, cystic fibrosis, inflammation, autoimmune diseases, epilepsy, cancer, and pain. The company co-discovered the HIV protease inhibitor, Lexiva®, with GlaxoSmithKline.