From the Archives: Dr. Livingston I presume? 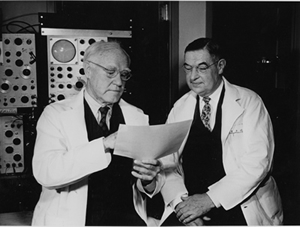 William K. Livingston, Chair of Surgery at the University of Oregon Medical School, looks on respectfully as Alan Gregg of the Rockefeller Foundation explains just how indebted the school is to him – or perhaps the paper is merely a prop. Gregg, one of the most influential men in medical research and education, was visiting Portland in February 1954 when this photograph was taken.

The two men sit in Dr. Livingston's lab in Mackenzie Hall. Beginning in 1946, Dr. Livingston conducted pioneering research on pain mechanisms in what he called the "Pain Project," with Tuesday pain clinics and Wednesday pain seminars open to all faculty as well as downtown practitioners. While Dr. Livingston's work was too far ahead of his time to receive much attention, it was in these clinics and seminars that Ronald Melzack first began to formulate his revolutionary gate control theory of pain.

Dr. Livingston (1892-1966) was educated at the University of Oregon and obtained his medical degree from Harvard (1920). He completed his surgical residency at the Mass General before returning to Oregon in 1922. He joined the faculty of the University of Oregon Medical School – the precursor to OHSU School of Medicine – in 1925 and became chair of the Department of Surgery in 1947. He was named Emeritus Professor of Surgery in 1961. He was the author of The Clinical Aspects of Visceral Neurology (1935); Pain Mechanisms (1943); and posthumously, Pain and Suffering (1998).