March 30, 2010 Portland, OR
With family and friends in tow, OHSU's graduating fourth-year medical students, gathered in the great hall of the Old Library building – nursing  butterflies in anticipation of what they were about to learn. It was Match Day, the day most had been thinking about almost from the moment they set foot on Marquam Hill. After a light brunch and a brief welcoming talk by Associate Dean Tana Grady-Weliky, the double doors to the adjacent conference room were ceremoniously opened. A few students marched in eagerly, others tentatively, still others held back, steeling themselves. 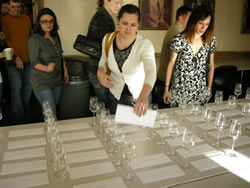 In front of them, on a long table in the sun-washed room, a sea of envelopes were arrayed alphabetically in rows. Next to each an empty engraved champagne glass commemorating the occasion stood glittering in the sun, waiting to fulfill its role if a celebration proved in order – as for most it would be. Each contained a letter from the National Resident Matching Program that would shape each of their lives for at least the next three years and, in all likelihood, set them on a course that would determine what they would be doing for the rest of their careers in medicine. The letter disclosed what residency programs they had been placed in by the NRMP, based on a computer algorithm that factored in a wide range of data points, not least of which were the rank lists of preferences each had submitted.

This was the culmination of a grueling process. It started with the answer to the big question. Which medical specialty did they want to pursue after graduation?  Some decided only recently, others years before. Where would they like to go to train for it? Some applied to more than 50 programs. Then came weeks of anxiety. Would they get interviews at the places they favored? Would they land any invitations at all?  What was taking so long? Finally, the invitations trickled in. Then, for some, they poured in. Now what? Could they schedule back-to-back interviews in far flung parts of the country to minimize travel expenses? Most would end up spending thousands of dollars on travel. Many had to take out loans. Finally, they had to rank their choices, an agony for many of them. Which program best fit their aspirations? Which was next best? Where would they feel the most comfortable? What choice, given the 80 hour weeks they were signing up for, would be the most compatible for a spouse or significant other?

Five fourth-year students in the Match shared their experiences leading up to Match Day.

"It's been a very emotional, exciting, scary experience for us," said Sharl S. Azar, president of the 2010 class. "The process messes with your head. The programs will send you 'love' letters and you'll send them love letters. I've heard my classmates comparing it to dating." A Portland native and Lewis & Clark College graduate, he matched in internal medicine at OHSU, his top choice, after interviewing at nine other medical centers including several in the East. The University of Utah ended up a close second on his list. "What really solidified it for me was the faculty at OHSU. I know the internal medicine department here. I've gotten to work with a broad spectrum of the internal medicine faculty during two rotations and a sub-internship here and I just loved them. I think there's a lot more I can learn from them. They're amazing mentors, people I hope to stay in touch with the rest of my life. That's what sealed the deal for me." Sharl did a rotation in oncology at Utah, however, and found that program very impressive. He can see himself going back there on an oncology fellowship.

Thomas Ciesielski, a Eugene native, graduate of the University of Puget Sound, and fourth in a line of family members who have gotten their MD degrees at OHSU, also matched in internal medicine. Ultimately he hopes to practice as a hospitalist at a major academic health center.

He will train at Barnes-Jewish Hospital, an affiliate of the Washington University School of Medicine in St. Louis, his wife's hometown.  It was his top choice. "It's a great program for me, it's where both of us could see ourselves living for the next three years, and for her, family and friends and the opportunity to pursue her career in banking."  He began the process last June when he sat down to frame the all important personal statement. "From about mid September when interview offers started rolling in, I was thinking about interviews, how to schedule them so the ones I was more interested were towards the middle, giving me time to get used to the process but not so late that I'd be burned out."  He interviewed at 10 different medical centers from early last November through mid January.

Patrick (Paddy) O. Kinney plans to go into rural family medicine and will intern with the Family Medicine Residency of Idaho, his first choice. The Oregon State University graduate who has strong ties to Oregon – his grandparents have a cattle ranch near Sisters – hopes to practice in Alaska, and perhaps go back to Homer, his hometown. He was invited to interviews with 11 family medicine residency programs but decided to limit himself to the Pacific Northwest. "Anything south or east is pretty far outside my comfort zone," he said. His plan is to learn the skills he will need, "to practice in an austere environment where there are not a lot of people to rely on but yourself.  When I showed up in Boise I got swept up by that program. I hope to leave Idaho being able to do colonoscopies and upper endoscopies and operative obstetrics among other things." He hopes to be able to deal with a wider range of cases than he might at a program in a more populated area because he expects there to be less competition from specialists. "It's pretty much just the family medicine folks that rotate in the two Boise hospitals, but you also go out to Caldwell and Coeur d'Alene, and it's similar to Alaska."

Rachel Thomas matched to a residency in emergency medicine at the University of Arizona Medical Center in Tucson. "I've pretty much known all along that emergency medicine is what I was going to do, although I tried to keep the blinders off and stay open to other specialties. My problem is I loved them all, which is what kept me on track to emergency medicine because you get exposure to everything."   Rachel relied on her mentors and queried OHSU interns who had gone through it the year before to help her winnow through the 144 emergency medicine residencies around the country and ended up applying to 30. Twenty-nine offered interviews including OHSU. "Oh my gosh, what do I do?" she thought. "You're gonna run out money, time and energy doing that." She cut her list to 12 and set off on the interview trail, using kayak.com to string together a money-saving itinerary of flights, schlepping her luggage on buses rather than relying on rental cars, and still spent more than $4,500 on travel. The hard part for her was assembling her rank list. "I lost a lot, a lot of sleep over that. I love the program at OHSU. I love the people. But I've been here for four years. It almost felt like too easy a choice." After painstakingly charting and gridding the possibilities, she put Arizona on top. "It was never about a name or who was the most prestigious."  It came down in large part to location. Where would her husband, marketing director at a retirement facility, be happy?  Equally important: "Where am I going to fit in the best and where can I excel? I needed an environment that was going to do that, where people work well together, because that's your family for the next three years. I work hard, but I also play hard. I love being outdoors, I run marathons, I ski and snowboard and I wanted a community that supported all those things."

Lawrence Tiglao is going on to an OB/GYN residency at the UC Davis Medical Center in Sacramento. It's a specialty he had no interest in until after a rotation at Providence St. Vincent Medical Center last year when the midwife he was aiding left to check on another patient.  Just then the expectant mother in labor began to deliver. "When the midwife came back the baby's head was crowning and she said, 'well, you're already there, you may as well do the rest.' It was a life-changing, career-changing experience." The complicated delivery Lawrence's wife Sarah endured in the birth of their first child James during the first year of med school had planted the seed. "But it wasn't until I had delivered a baby myself that I felt like this was something I could really do." He applied to 21 OBGYN programs, interviewed at 12 and UC Davis moved to first place on his rank list. He would love to stay in Oregon, Lawrence says, but proximity to extended family in the Bay Area, the quality of the UC Davis program generally and the strength of its faculty in gynecological oncology, an area he hopes to focus on beyond his residency, were the deciding factors for him. He has not ruled out returning to Oregon after he finishes his residency. Lawrence has followed a circuitous path to this point. Originally from Arlington, VA, playing baseball was his consuming interest when he started college in North Carolina. Restless, he fled to the West Coast, found shelter with an aunt in Berkeley, worked for a record company in San Francisco, did a work-study program in London, traveled for months on the European continent with his future wife, and ultimately graduated in anthropology from UCLA.

These five are among 125 of OHSU's fourth-year medical students who will begin postgraduate clinical training in residencies this summer. Forty-eight percent  – a total of 60 – will be going into primary care, matching to residencies in internal medicine, family medicine, or pediatrics. Family medicine residencies, in particular, were a destination for 20 percent, or 25 of the students – a 56 percent increase over last year when 16 chose that specialty.  Twenty-two are going into internal medicine, and 11 into pediatrics. Other destinations include 15 who will do residencies in emergency medicine, nine in OB/GYN, seven in radiology, five in surgery, four in oral surgery and three in anesthesiology.

Thirty percent – or 34 of OHSU's medical school seniors – will stay in Oregon, including the 22 percent, or 28 students, who chose to stay at OHSU to do their residencies. All told, 74 percent of the OHSU seniors, or 93, will remain in the West, including Oregon.  OHSU's graduate medical education ranks 10th in the nation for in-state retention of residents and more than half of the new physicians completing their residencies at OHSU remain in Oregon to practice. One-third of all Oregon licensed physicians, in fact, completed all or part of their education at OHSU.