Paper of the Month: Serendipity meets the prepared mind

TRPV1 is a receptor/ion channel that is widely associated with pain detection in peripheral neurons but is also found in other places in the body that have nothing to do with pain sensing – particularly in the brain itself. Since pain detection is not performed by the brain, the role of central nervous system TRPV1 remains a mystery. 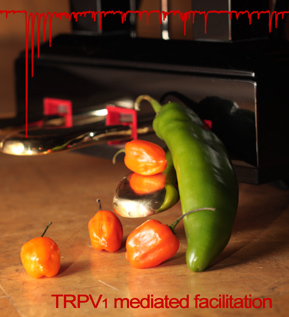 The study showed that TRPV1 is present in primary afferent neurons that enter the brain directly at a single point called the solitary tract nucleus (NTS) – these afferent neurons help control the heart, lungs, and other vital organs. The authors found that TRPV1 is not simply passively present but is actively controlling the release of vesicles of the transmitter glutamate. While the rapid tightly-synchronized evoked release of glutamate is unaffected by TRPV1, activation of the channel is essential to trigger the sustained or asynchronous release of glutamate. Under normal conditions, the amount of transmitter released by the TRPV1-triggered asynchronous mechanism was similar to that released by the conventional evoked pathway. However, this facilitated release of glutamate by TRPV1 receptors generated sustained action potentials well beyond fast transmission. Like the sustained pedal on a piano that prolongs a musical note, TRPV1 prolongs the duration of synaptic transmission at specific central synapses.

Dr. Andresen commented that this study, as often happens, grew out of someone taking a fresh look at a familiar problem only to find something completely new and unexpected. First author Jim Peters (now at Washington State University, Pullman) became convinced he could predict which neurons would respond to the hot pepper spice capsaicin – this component of chili peppers is an irritant and produces a sensation of burning in any tissue with which it comes into contact – and activates TRPV1 receptors. Dr. Peters' challenge to the team to prove him wrong resulted in an energetic case of back-and-forth among colleagues to both render judgment on his predictive abilities and then to collaboratively dissect the observation and its meaning. It was, said Dr. Andresen, "very much a case of serendipity meets the prepared mind."

*James H. Peters, Stuart J. McDougall, Jessica A. Fawley, in the Department of Physiology & Pharmacology and Stephen M. Smith, Department of Medicine, Division of Pulmonary and Critical Care Medicine. A list of all OHSU-authored papers published last month is here.

The School of Medicine News spotlights a recently published faculty research paper in each issue. The goals are to highlight the great research happening at OHSU and to share this information across departments, institutes and disciplines. The paper is selected by Associate Dean for Basic Science Mary Stenzel-Poore. This monthly paper summary is reviewed prior to publication by Dean Mark Richardson and Vice President/Senior Associate Dean for Research Dan Dorsa.