It’s a long flight from Oregon to the nation’s capital, but OHSU School of Nursing leaders and students will make the journey to be present at key discussions with other nursing professionals during the spring annual meeting of the American Association of Colleges of Nursing, March 21 to 23, 2010.
April 01, 2010 Portland, OR 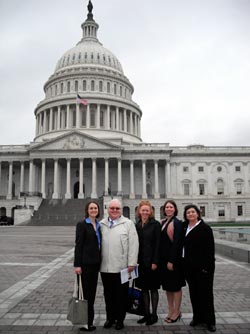 Three OHSU students, including Kirsten Williams, Tera Roberts, and Rebecca Cooper, will attend the first AACN Student Policy Summit, an immersion program on the importance of nurses' engagement in the policy process, which coincides with the AACN's spring meeting. The AACN awarded Williams a full scholarship to attend the inaugural summit.

On Monday, the Oregon nurses will meet face-to-face with Oregon's Congressional delegation on Capitol Hill. The visits were arranged by the AACN to advance its agenda of improving access to quality patient care. Among its priorities are a $267.3 million request for the National Workforce Development Programs (Title VIII, Public Health Service Act) in 2011, and help for nursing's leading scientists through a $160 million request for the National Institute of Nursing Research's in 2011.

"At this historic juncture in health reform, we know that registered nurses and advanced practice nurses can be a tour de force to generate solutions that will address the health needs of all Americans," says Bleich. "We also know that nursing has issues in creating an adequate number of nurses due to lack of faculty and resources, and that structural issues fail to let nurses function to their fullest scope of capability."

Bleich had been asked by Sen. Jeff Merkley to make a short speech at the March 23, 2010, kick-off announcement of a newly formed Senate Nursing Caucus. (It was cancelled due to voting on healthcare reform legislation.) The caucus will be the senate counterpart to the Congressional Nursing Caucus which serves as a clearinghouse for issues important to the nursing community.


Tags School of Nursing
Previous Story Dean Richardson weighs in on health care reform Next Story Message from Dean Richardson: Envisioning a post-Flexner era for the next century