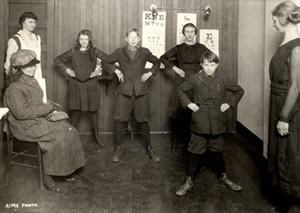 Estella Ford Warner, MD, OHSU Class of 1918 (in white smock), gets some experience in drilling young men and women in the Nutrition Clinic at the People's Institute and Portland Free Dispensary in this photograph taken circa 1920. Dr. Warner would put that training into good use when, in 1932, she joined the United States Public Health Service as the country's first fully-commissioned female officer. In a 1937 letter to school registrar Lucy Davis Phillips, Warner confirmed that she was still the only female officer in all the Army, Navy, Coast Guard, or Public Health Service – and that her rank as Surgeon entitled her to wear a sword. By the time of her retirement from the service in 1956, she had distinguished herself as chief of health missions in New Delhi, India, and creator of the public health program at American University in Beirut, Lebanon.  Dr. Warner's interest in public health began here in Portland with her work at the People's Institute and Portland Free Dispensary, which was the first successful collaboration between the young medical school and the community. In 1931, the dispensary would officially merge with the school to become the University of Oregon Medical School Outpatient Clinic, housed in the building now known as Sam Jackson Pavilion