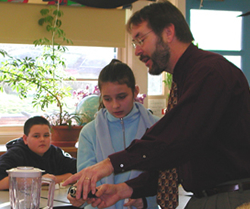 Billy Martin, Ph.D., splits his professional life in several ways. Much of the time he is working with those who suffer from chronic, disabling tinnitus (ringing in the ears). He is also working with colleagues trying to figure out how to shut off this frequently debilitating sound . Other times he is mapping the function of the brain during neurosurgery.  Lately, he frequently finds himself quoted in newspapers around the world on topics ranging from cicadas to iPods. It's part of the Oregon Hearing Research Center's award-winning public health outreach campaign to reduce noise-induced hearing loss and tinnitus (or ringing in the ears), called Dangerous Decibels®.

"The importance of community outreach as one of the key endpoints of translational medicine cannot be overstated. Taking our research and packaging it in a digestible format that can be consumed by young people in ways that will change their health behaviors for the rest of their lives is phenomenally rewarding," said Dr. Martin, Professor in the Department of Otolaryngology/Head and Neck Surgery with a joint appointment in the Department of Public Health & Preventive Medicine.

Noise-induced hearing is considered a national epidemic, with about 5.2 million 6-to 19-year olds suffering hearing loss directly related to noise exposure. With the increase usage of personal stereo systems focused on continuous headphone use, the incidence is likely to rise without interventions. The most commonly reported precipitating factor for tinnitus is also noise exposure.

The program had its genesis in a charge from Senator Mark Hatfield in the late 1990s – "Think big!" he said, encouraging School of Medicine hearing researchers to join forces with community clinicians and other groups. Several grants later, Dangerous Decibels was a reality. The mission of the outreach campaign then and now is to significantly reduce the prevalence of noise-induced hearing loss and tinnitus through exhibits, educational outreach and research. The strategy is to change the knowledge, attitudes, and behaviors of school-aged children about sound exposure and the use of hearing protection strategies.

Dangerous Decibels includes a permanent museum exhibition at the Oregon Museum of Science & Industry (OMSI) where visitors are welcomed by a giant, walk-through ear. Educator workshops train a wide range of interested groups to deliver the Dangerous Decibels curriculum across the nation. The Dangerous Decibels resources have gone international. The classroom program is being taught across Canada and will be delivered in all schools in New Zealand.  Australia is also planning to incorporate it into their national hearing health plan. Some of the resources are now in French and German and Dangerous Decibels materials are being used in 47 US States and 14 different countries.

One objective of the program is to create "gut level" sense of sounds that are dangerous – nightclubs, concerts, iPods, firearms, lawnmowers. Equally important, the program provides simple protection strategies: turn it down, move away, protect your ears.

Dangerous Decibels has partnered with the Northwest Portland Area Indian Health Board, to address hearing health issues in tribes across the region. "Hearing is an essential part of tribal life. Traditions are passed on from generation to generation by word of mouth. If you lose your hearing, you're out of the loop," said Dr. Martin. The tribal communities report high levels of occupational and recreational noise exposures and Dangerous Decibels has begun working with their children.

Dr. Martin concludes, "To me, the essence of translational research is taking magnificent images captured during NIH funded, basic science research by my colleagues in the Oregon Hearing Research Center, incorporating them into an innovative and exciting hearing health program, and then seeing the lives of children changed by the experience. None of this could happen without the contributions of the fantastic Dangerous Decibels team."