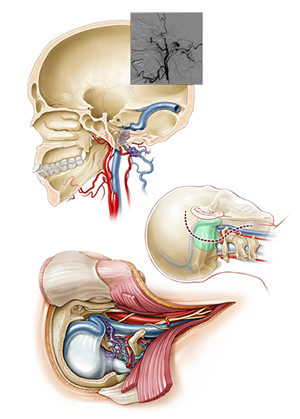 Five times in the last four years the editors of the American Association of Neurological Surgeons’ Journal of Neurosurgery have chosen to grace the cover of their publication with the artwork of prize-winning medical illustrator Andy Rekito, MS, Instructor, Department of Neurological Surgery. His peers in the national Association of Medical Illustrators (AMI) have honored him with ten awards since 2001. This summer he will be in the spotlight again when the AMI holds its 65th annual meeting in Portland (July 28-August 1) for which he is helping to arrange neuroanatomy-based lectures and presentations by surgeons from his department, including a day-long skull base surgery workshop, led by Johnny B. Delashaw, MD, Professor.

If a picture is worth a thousand words, Andy’s four-color illustrations are pure gold, which is why he’s kept busy on a steady stream of assignments, providing images for medical journal articles and book chapters that faculty members of his department are writing, as visual aids for lectures they are planning, or a variety of other uses. The projects run the gamut from novel case studies and descriptions of anatomic anomalies to new surgical approaches or an explanatory piece by a surgeon with expertise in a particular procedure. There’s a lot of back and forth with the surgeons he works with. Sometimes he’ll be invited to observe procedures in the OR, snap photographs and take detailed notes, or he’ll get after-the-fact descriptions.“They’ll say: ‘We removed this rib and that section of the vertebra to get to the tumor, which was in this part of the spine.’ And I’ll ask: ‘Do you want to show that you avoided that certain piece of vasculature, or that you had to go around that bone? What are the main teaching points? What amount of surrounding anatomy do we really need to view? Can we just have a vertebral column and spinal cord floating in space or do we need to see the skin incision, muscle retraction and the rest of the surgical exposure?’” Then he’ll produce thumbnail sketches to make sure he’s on track with their thinking before doing the final drawings.

Andy’s boyhood ambition was to be a painter or comic book illustrator, but the seed that ultimately bloomed into a career was planted by a high school science teacher who was taken by his drawings. The high school, as it happens, was in Augusta, Ga., site of the Medical College of Georgia (MCG) – one of the handful of institutions in the country with a graduate program in medical illustration – and Andy’s teacher urged him to look into it. He did, but at that point he wasn’t sure it would be “creatively satisfying.”  It wasn’t until he crossed paths as an art major at the University of Georgia in Athens, GA, with a professor named Gene Wright that the idea really began to take hold. Wright, a practicing medical illustrator on the side, taught watercolors and ran a program called “scientific illustration,” which involved illustrating plant studies, animals, insects, and other non-medical scientific concepts. That became Andy’s major. After earning his fine arts degree, he went on to MCG’s two-and-a-half year graduate program in medical illustration where students learn advanced illustration techniques and the necessary medical science concepts by taking anatomy and physiology classes alongside  first year medical students. 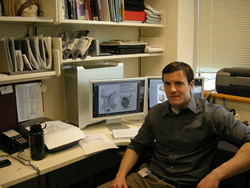 He worked as an illustrator in the department of neurosurgery at MCG after graduating and then as an assistant adjunct professor in the departments of neurosurgery, neurology, and medical illustration there. Drawn by the Pacific Northwest and a love for outdoor pursuits, he relocated to Portland and met with Department of Neurological Surgery Chair Kim Burchiel, MD, FACS, who was intrigued at the prospect of hiring Andy to bolster the educational and academic missions and to create a distinct visual identity for the department. “Recruiting Andy to our department was the proverbial ‘no-brainer,’ if you’ll excuse the expression.  His work is so creative and elegantly presented, I felt that he would represent a tremendous asset to our group, our publication and teaching programs, and our public persona.  I haven’t been disappointed.”

Since 2005, the combined efforts of department editor, Shirley McCartney, PhD, and Andy have helped the department continually increase its annual publication output and build a national reputation for the quality of its publications. “I get to be creative,” he says; “I love making images, I love telling a story as simply and cleanly and effectively as I can, and my story happens to be medical concepts, whether it is anatomical, surgical or physiological.”

Cutline with illustration:
Illustrations by Andy Rekito on the cover of the Journal of Neurosurgery [J.Neurosurg./Vol. 109/August 2008] depict an extremely rare case of a man with a dural arteriovenous fistula involving the hypoglossal canal at the base of the skull and the approach OHSU neurosurgeons – led by Johnny B. Delashaw Jr., MD – took in obliterating it.