April 27, 2010 Portland, OR
A rapt audience in the OHSU Auditorium heard Thomas R. Insel, MD, Director of the National Institute of Mental Health, assert earlier this month that we are at an inflection point in our understanding of mental illness that promises in the not- too-distant future to bring effective therapies and real cures within striking distance. [Dr. Insel’s bio]

This is not a “pie-in-the-sky” vision, Dr. Insel said in a lecture titled “Re-Thinking Mental Illness” sponsored by the OHSU Neuropsychiatric Institute. “We’re really able to provide much more hope than in the past. It’s entirely doable. We have all the tools we need – genomics, imaging, proteo 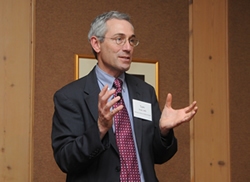 To succeed, however, ultimately will require a change in the mindset of those who treat mental health problems as well as the general public. “We have to rethink these disorders in fundamental ways,” Dr. Insel said. It may be more accurate, he noted, to think of them as brain circuit disorders rather than psychological ones, as problems with the conduction of information and electroactivity across the brain.

“Mental illnesses are medical problems every bit as much as cancer and heart disease, where we want to know everything about the underlying biology. There’s no reason why we shouldn’t be doing the same thing with schizophrenia or bipolar disorder or ADHD, or any [mental] illness. The prospect for that is getting to biological diagnostics to diagnose these disorders very much the way we do for the rest of medicine, and to treatments that go at the core of these illnesses.”

“This is not just a health care problem, it’s a social justice issue. How do we provide for people who have a disabling medical disorder that now is largely a source of discrimination?"

Dr. Insel, who has led the NIMH since 2002, sketched out the immense costs of mental illness. It is the greatest cause of disability in the developed world among people under the age of 45, according to the World Health Organization.

In the U.S., six percent of the population is disabled at some point by these disorders, which in half those affected start by age 14 and in 75 percent by age 24.

It accounts for 90 percent of the 33,000 suicides in the U.S. in 2007, the last year for which there is data. That’s almost twice the number of homicides and more than all the deaths due to cancer. Serious mental illness shortens life spans by 25 to 33 years. Although they make up 6 percent of the populace, those with these disorders smoke 44 percent of all the cigarettes each year. And they are the largest single group receiving Social Security medical disability income.

Counting lost income, disability payments, and treatments, the monetary costs of mental illness total about $317 billion a year, Dr. Insel said. And that doesn’t include the costs homelessness and incarceration that occur outside the health care sector.

“This is not just a health care problem, it’s a social justice issue. How do we provide for people who have a disabling medical disorder that now is largely a source of discrimination? People have been shunted out of health care into all these other avenues with very poor outcomes. We currently diagnose by symptoms and treat by episodes, and clearly that’s not a recipe for cures and prevention.”

A whole new generation of medications and of non-medical psychosocial treatments like psychotherapy is needed, Dr. Insel said. That quest has been hastened by the rapid progress researchers are making in mapping the circuitry of the brain, which has been dubbed the “connectome.” He cited a recent study showing that some of these connections can change with psychotherapy, which he called a “profound insight” that shatters the divide between biological and psychosocial approaches. “It’s clear that psychosocial approaches really have profound biological effects when you look in the brain itself.”

The brass ring, said Dr. Insel, would be statin-like compounds that would head off diseases like schizophrenia before they emerge much as statins control high cholesterol to prevent heart attacks. But, he added, the answer might not be a medication at all but a psychosocial intervention like a video game that could alter the map of synaptic losses. The idea would be to harness the brain’s own plasticity to change pathways for its own best interests. The key will be to find a way to nip these disorders in the bud before the symptoms are clearly observable. “We don’t do very well in medicine at the late stage in any problem,” he noted.

Dr. Insel did not sugarcoat the difficulties. “The biggest challenge I suspect will be translating research to practice. One hopes that mental health parity in the advent of health care reform might make this easier. But even with these spectacular new tools that begin to do early diagnosis and give us biomarkers and new treatments that look like cures, we have to make sure that that’s actually what’s done in the real world, that we have the people that are trained to do this, that people can access those treatments, and that they can pay for them through a system that currently doesn’t exist.

“The bottom line here is that we can do this, we have the tools, but it’s going to take a village. It will take places like this [OHSU] where you have fantastic neuroscience, fantastic clinical opportunities, a great academic health center, new opportunities like the Neuropsychiatric Institute and the combined effort of public and private partnerships.”