In June, Kindra Scanlon will become the first OHSU nursing student to sit on the board of the National Student Nurses Association (NSNA).
April 27, 2010 Portland, Ore. 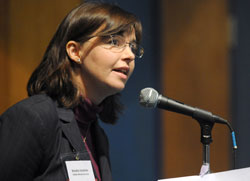 In June, Kindra Scanlon will become the first OHSU nursing student to sit on the board of the National Student Nurses Association (NSNA). She will assume the editorship of Imprint, the organization's magazine. The NSNA is the largest student nursing organization in the country with 45,000 members. Scanlon was elected to the 10-member Board of Directors at the annual convention held in Orlando Florida, April 7 to 11, 2010.

"The position gives me the opportunity to network with students at the national level to create a greater awareness of the Northwest and our potential contributions as well as learn from others nationwide," said Scanlon, a junior at OHSU. Her duties include chairing the Image of Nursing Committee, attending meetings at the NSNA headquarters in Brooklyn, NY, writing a column in Imprint and garnering content for the magazine from student leaders around the country.

Scanlon is president-elect of the Oregon Student Nurses’ Association (OSNA), a position she must relinquish when she assumes the NSNA editorship. Previously she served as OSNA’s media director from 2007 to 2008 and 2009 to 2010. She currently volunteers at OHSU’s Global Health Center, an interdisciplinary initiative started in 2007 to connect academia, government, business and others in developing solutions in healthcare around the globe. She hopes to start a nursing version of Doctors Without Borders during her senior year or immediately after graduation “Nurses are amazing and can offer [humanitarian help] at a different level than doctors.”

Her long-term goal is to earn a doctorate of nursing practice and work as a clinical nurse specialist in a hospital setting where she can teach other staff about new technologies, new trends and important issues in nursing.

Previous Story NIMH Director Thomas Insel: An inflection point in mental illness treatment Next Story The Long Journey to Child Care at OHSU: How WAM Made a Difference