The Long Journey to Child Care at OHSU: How WAM Made a Difference

In December of 2009, OHSU announced plans to bring a child care center to the South Waterfront campus; the Women in Academic Medicine (WAM) committee is proud of the role it played in this achievement.
April 28, 2010 Portland, OR 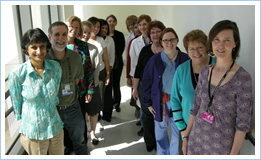 Since its inception in 1993, WAM committee members have always looked for ways to address issues of concern to women faculty. Whether pushing for a more diverse environment on campus or promoting women in key leadership positions, the committee has played a significant role in changing the culture at OHSU.

With the increasing number and proportion of women entering medical school over the last 20 years, WAM recognized that a dramatic shift in workplace needs was taking place and renewed the debate over how best to integrate family choices with career paths. This included looking at the role child care played in everyone’s career and how to create an environment that best supported his/her career choices.

WAM understood that for many parents, particularly women, careers had often been put on hold during a child’s early years due to the various inconveniences surrounding child care, including prohibitive costs and logistics. What was needed was an inventive model, something that offered working parents the comfort of being close to their children by day, so they could focus more fully on their job while being more accessible for their children when needed. The committee explored the idea of establishing an on-site child care facility on campus.

“Being able to say we have child care associated with OHSU sends a strong message that OHSU is family friendly.”

While the idea of establishing a child care facility on campus had been around for decades, it wasn’t until recently in 2008 when startup funds became available from an insurance settlement that OHSU was required to use “for the benefit and well-being of employees,” that the dream of bringing child care to the university suddenly seemed viable.The WAM committee went into action. The first step was a focused needs assessment of about 90 faculty members taken during a faculty workshop on work-life integration which showed child care on the hill to be the number one pressing need for women faculty. Based on these results, WAM helped create a large, institution-wide needs assessment survey and, with personal outreach, encouraged departments to complete the questionnaire. The survey was met with an exceptionally high number of responses with 3,136 individuals completing the survey. Of these, 54% indicated they preferred child care close to work, while 32% had no preference. Moreover, a third of the respondents indicated they might enroll their children in an OHSU child care center.

The Council was formed in late 2008 with additional members representing the various mission areas and employee groups at OHSU. The Council began meeting regularly to gather and review benchmarking data from other employer-sponsored childcare centers and develop recommendations on various program aspects. As the group began evaluating potential providers, they conducted a second needs assessment to confirm demand and determine more specifics about usage.

“It was a challenging road that required persistence,” said Dr. Harrison. “Early on we were told it would be virtually impossible to make this dream a reality, as both location and funding were major obstacles.”

Throughout the process, Dr. Harrison and fellow WAM co-chair Sima Desai, MD, Associate Professor, Department of Medicine, Division of Hospital Medicine, wrote letters and met with institution and human resource leaders to reinforce the implications of the data and the importance of child care to faculty satisfaction.

In May 2009, after evaluating and interviewing potential childcare providers, OHSU chose Childrens’ Creative Learning Centers (CCLC), a nationwide child care provider dedicated to quality employer-sponsored early childhood education, to open its first near-site child care center in Portland. CCLC was chosen because of their experience, their reputation, their emphasis on diversity and eco-conscious construction, and because they proposed a desirable location on the South Waterfront. Negotiations on a final agreement between OHSU and CCLC began, led by Mark Williams, associate vice president for Campus Development and Administration, while CCLC simultaneously negotiated a lease agreement for the desired location.

Enrollment began in January 2010. The center, which is slated to open in the fall of 2010, will have capacity for 172 children aged 6 weeks to 5 years and will be open for full-time and part-time care Monday through Friday.

“Child care is a gender neutral issue,” said Dr. Desai. “Being able to say we have child care associated with OHSU sends a strong message that OHSU is family friendly.”

“Family friendly” is an increasingly important issue. Not only are more women entering medicine, lifestyle expectations of the upcoming ‘millennial’ generation are shifting. Many new parents, both men and women, prioritize time with family and are not willing to sacrifice that time, as had been a cultural expectation of prior generations when fewer women were in the workplace. As society adapts to this changing expectation, child care availability near campus will help OHSU remain an attractive professional environment.

WAM committee member Charles E. Roselli, PhD, Professor, Department of Physiology & Pharmacology, summed it up best, when he said, “The future of academic medicine depends on its ability to attract and retain talented young men and women by offering opportunities that afford success and satisfaction in both their professional and personal lives.”

OHSU’s new child care facility is an important step in that direction. While this is a huge step for employees at OHSU, WAM hopes that as the child care center grows and demand increases, further expansion of child care resources on the hill will be considered.