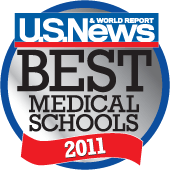 The OHSU School of Medicine primary care education programs were ranked third in the nation by U.S. News & World Report in its annual survey of "America's Best Graduate Schools 2011 Edition."

In a companion survey of specialty programs, the School of Medicine's rural medicine program ranked fourth nationwide and the family medicine program also featured in the 2011 listings of best specialty programs, ranking at number two in its category – a jump from number eight in 2010. For more than a decade, U.S. News & World Report has consistently ranked the School of Medicine's education programs among the best in the nation. Rankings are based on peer assessment surveys.