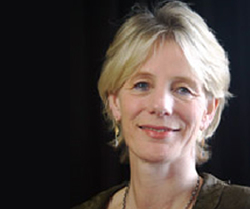 Early on, Dr. Stenzel-Poore became interested in the question "how does the immune system react to injury in the central nervous system?" She decided to study stroke as a model of brain injury.

Stroke is the third leading killer in the United States, and even those who survive can be profoundly impaired. Following a stroke, a significant inflammatory response occurs which can worsen ischemic damage. Inflammation is a normal component of the immune system’s response to injury, and thus brings attention to the role of the immune system during stroke recovery.

One aspect of inflammation being examined by Dr. Stenzel-Poore’s laboratory involves the Toll-like receptors (TLR) – molecules used by the immune system to sense impending harm, usually in the setting of infection. A normal response to injury or infection causes a robust, TLR-mediated inflammatory response, which can mean death to delicate brain tissue.

The team found that treating mice with certain TLR ligands prior to stroke reprograms the brain’s response to ischemia away from inflammation and injury, and towards cell survival and neuroprotection.

Following treatment with a TLR ligand, mice experiencing a stroke showed much less brain injury and a dampened inflammatory response. This process requires treatment in advance of brain ischemia. While it is difficult to anticipate sudden stroke, there are medical conditions that put patients at acute risk of brain ischemia. For example, coronary bypass recipients, endarterectomy patients, and pediatric heart patients all have a much higher risk of ischemic injury.

Dr. Stenzel-Poore realized that therapeutics based on her research would save brain tissue, and in many cases, lives of patients at-risk for stroke.

An example of a well known TLR ligand is Lipopolysaccaride (LPS), a bacterial endotoxin that is non-injurious in small doses, but is a potent inducer of neuroprotection. LPS binds the TLR system, and has been shown to cause increased expression of two anti-inflammatory cytokines. By examining LPS and other TLR ligands, the team discovered several promising candidates for therapeutic drugs. “Fortunately, several of these TRL ligands are currently in clinical trials or already used as treatments for other diseases, so many of the FDA drug-development studies have been done previously,” said Dr. Stenzel-Poore.

Dr. Stenzel-Poore and her team are currently working with the Oregon National Primate Research Center on pre-clinical trials for some of these molecules, with the hope of starting human clinical trials early in 2009. “We have formed a new biotech startup company, Neuroprotect, Inc., whose focus is neuroprotective therapy,” said Dr. Stenzel-Poore. The project was awarded funding from OHSU through Technology Transfer’s Bioscience Innovation Fund to collect pre-clinical data.

Dr. Stenzel-Poore started her scientific career in the very same department over 20 years ago as a graduate student, after finishing her undergraduate degree at Lewis & Clark College. After a postdoctoral fellowship at the Salk Institute in San Diego, she returned to OHSU as an Assistant Professor.

In addition to running an active research program, developing a new biotech start-up company, and acting as chair of the department, she is also on the scientific advisory board for OTRADI, the Oregon Translational Research and Drug Discovery Institute. She is also the permanent chair of NIH’s Special Neuroscience Research Program for Under-represented Minorities and serves on several scientific peer-review panels.