She actually discovered two binding sites that were not on anyone’s radar, that are very provocative to us and this finding has stimulated my thinking. We’re talking about ways to explore her discovery now.
June 29, 2010 Portland, OR 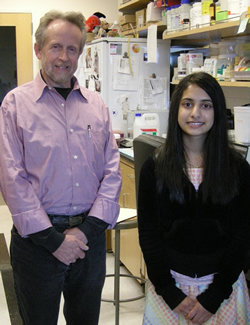 David K. Grandy, PhD, Professor, Department of Physiology & Pharmacology, has mentored many high school science students in his 25 years as a research scientist in the OHSU School of Medicine. But Yamini Naidu, his latest charge, is in a class by herself.

The diminutive ninth-grade student – who turned 15 in January and barely reaches five feet on her tiptoes – got turned on to science in middle school after winning awards at several school science fairs. She discovered that she had a true passion for science and decided to search for a place to get practical professional guidance on how “real” scientific research is done. She e-mailed a number of investigators, but Dr. Grandy, Professor, Department of Physiology and Pharmacology, was the only one who followed up with her and encouraged her to pursue her interest.

“I was impressed by her e-mail,” he said. “My laboratory was going through a transition and I had room for her and an ideal project.”

He recalled his own youth back in Cleveland, Ohio, where he had the opportunity to work with scientists at NASA’s Lewis Research Center in the 1960s during the height of the “Race to the Moon.”

“That experience not only gave me confidence in myself but seeing how professional scientists work was really transforming. Having benefited from that kind of special opportunity, I’ve always felt the best way to repay the generosity of my NASA mentors is to share my passion for basic research and discovery with those who are really motivated.”

Dr. Grandy’s generosity would prove to be mutually beneficial. Yamini joined a quest Dr. Grandy and his team have been on for 25 years, to design new drugs that offer promise in treating debilitating mental conditions, one of them being methamphetamine addiction. Yamini had been particularly affected by the suffering an uncle had endured as a result of a stroke, and she harbored an ambition to do something that would help stroke victims. Meth, Dr. Grandy explained to her, can produce stroke in young abusers and so the availability of a new drug that can block this effect could be of real clinical benefit.

Dr. Grandy and his team were the first to discover trace amine-associated receptor 1, aka TAAR1, and demonstrate that it is directly activated by meth. “This finding has given the field its first new target in 45 years,” said Dr. Grandy who recently was the recipient of a Cutting Edge Basic Research Award by the National Institute on Drug Abuse. TAAR1 is one of seven previously unknown G protein-coupled receptors (GPCRs) Dr. Grandy and his colleagues have discovered and characterized. Based on his group’s most recent work, Dr. Grandy has hypothesized novel compounds that prevent meth from binding to TAAR1 can be designed and will ultimately lead to a medication to help meth users kick their habit. 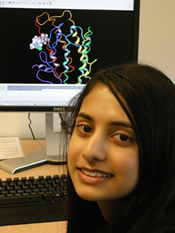 After steeping herself in the molecular biology of GPCRs activated by biogenic amines including phenylethylamine, dopamine and norepinephrine (noradrenaline), Yamini used the published crystal structure of human Beta-2 adrenergic receptor, a close relative of human TAAR1, to create a 3-D model.

Yamini’s persistence in manipulating the orientation of the TAAR1 model for a way to bind meth as well as promising proprietary drug compounds designed and synthesized at OHSU, paid off in a big way. “She actually discovered two binding sites that were not on anyone’s radar, that are very provocative to us and this finding has stimulated my thinking,” said Dr. Grandy. “We’re talking about ways to explore her discovery now.”

In addition to creating a 3-D human TAAR1 model in silico, Yamini also produced a glass rod model of the human TAAR1 with the help of her parents, and crafted a poster presentation about her project that won her first place in the chemistry division at the Intel 2010 Northwest Science Expo held in March on the campus of Portland State University.  Her project also won her an invitation to give an oral presentation of her work at the annual regional meeting of the American Chemical Society in Pullman, Wash,  as well as an invitation to deliver a presentation to the Society’s regional scientific meeting in Portland in October.

Yamini said she wants to become a neurosurgeon. Dr. Grandy has no doubt she can do whatever her ambition dictates. “She has tremendous enthusiasm, motivation and such an inquiring mind,” he said. “However, I hope she doesn’t become too focused too early. There’s still so much for her to experience and explore. But who knows, before she’s 25 we might see her back here as a resident.”