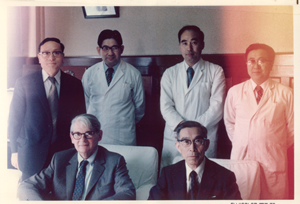 A terrible photograph. Grainy, blurry, overexposed. One of two (and the better of two) snapshots of people in a scrapbook labeled "Japan 1977." Seated at left is OHSU biochemist Howard S. Mason, PhD, mason_japan1977notebook_079meeting with Japanese colleagues at the Research Institute for Food Science in Kyoto, on April 13, 1977.

Dr. Mason had been collaborating with Japanese scientists for decades by the time of this trip, and would continue to do so for the remainder of his career. In 1988, Dr. Mason was the first Oregonian to receive the Order of the Rising Sun, Third Class, for his work in fostering scientific exchange between the United States and Japan. Of his experiences working with the Japanese, Dr. Mason wrote: "I [had] encountered the idea that it is no harder to find and work on important questions than trivial ones, and I learned the difference between them in terms of the generalizations and principles that could emanate from any set of experiments. However, I only did one critical experiment in my life – the discovery of biochemical oxygenation, or rather, of biological oxygen transfer. At any rate, that is what I brought to my Japanese colleagues, although most of them probably never knew what hit them…"

This scrapbook and others like it were put together by Dr. Mason during his long career at OHSU, which spanned more than thirty years. Books, research, and correspondence have been deposited in the OHSU archives so that historians can determine what else Dr. Mason brought to his colleagues, both at home and abroad.