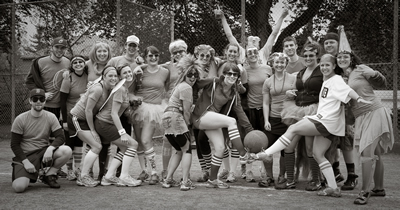 During the Oregon Society of Physician Assistants' Spring Medical Update in Portland, students held a raffle with items such as Beavers baseball game tickets, handmade jewelry and a local restaurant gift certificate. With the help of CME attendees, the group was able to bring in $500 toward their goal. An additional $600 was raised at the fall CME conference, also to benefit Wallace Medical Concern.

The following week, the class hosted the third annual OHSU Kickball Tournament, a tradition begun by OHSU's PA Class of 2010. More than 150 people competing on 10 teams representing the PA, dental, medical, nursing, RT, and RA schools raised $1,000. The Med 11 Team "Pill Hill Pirates" took the title, with the PA 11 team "Kick in the Grass," finishing a close second. On May 11, representatives from the Wallace Medical Concern visited the Marquam Hill campus to accept the $2,000 donation from the PA class.