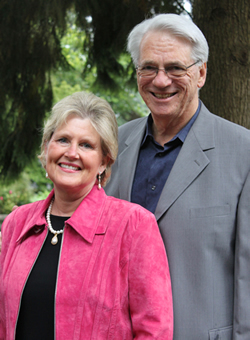 Born in The Dalles, Ore., Mark Hattenhauer, M.D., Assistant Professor, Department of Medicine, moved with his mother to southeast Portland at the age of five. He attended Washington and then Madison high schools and became the first in his family to complete college, attending Willamette University and Portland State College under the three-year baccalaureate program.

From an early age, Dr. Hattenhauer was drawn to a career in medicine. “It was the greatest day of my life,” he said, “when I opened the mailbox and found that I had been accepted into the OHSU School of Medicine.”

But then, as it does for many aspiring physicians and scientists, the question of affordability came into play. “Our family income was around $100 a week in the early 1960s,” he said. “The scholarship assistance I received at OHSU made the difference.” Newly married at the time, he helped make ends meet by working during the summer vacations, reviewing charts for an OB/GYN research project and serving as an extern with psychiatric patients at the now-closed Dammasch State Hospital. He graduated in the Class of ’66, completed his residency at OHSU and was accepted into a cardiology fellowship.

“The education I received at OHSU was the foundation for everything else I did, the bedrock of my success,” he said. “Thanks to a solid education and personal mentoring from legendary physicians such as Dr. Howard Lewis, I was able to navigate and adapt successfully to a period of great change in cardiology just as I began my career. For example, our world was completely transformed when the first coronary angioplasty took place in Switzerland in September, 1977.”

Dr. Hattenhauer went on to perform the first coronary angioplasty in Oregon on June 12, 1981, and taught these same angioplasty techniques to physicians all over the Pacific Northwest. Committed to life-long education, he passed on what he had learned by serving Oregon’s and Washington’s mid-size communities, providing consults in The Dalles, Goldendale, Lincoln City, Newport and elsewhere. He was recognized in June 2008 with the Marion L. Krippaehne Humanism Award for his exceptional compassion in caring for patients and now has a practice at St. John’s Medical Center in Longview, Wash., on assignment from the OHSU Division of Cardiology. “It’s all about teaching and sharing,” he said.

Despite the advancement of imaging technology in his field, Dr. Hattenhauer continues to believe in the fundamentals he was taught in the early 1960s and hopes that the generation of students who will benefit from the scholarship will do the same. “Listen to the patient. The information you need will be in the history, and will guide your physical examination. Then follow up on the details. You have to follow up and do what you tell the patient you are going to do.”

Dr. Hattenhauer met his wife, Chris, a registered nurse, at Good Samaritan Hospital. She shares his desire to teach and mentor others and has been a preceptor to students and new RNs at many local hospitals, including OHSU. “I am very impressed with the outstanding qualities shown by OHSU’s medical students,” she said. “I hope this scholarship opens doors for more young students to be able to pursue their dreams.”

“It’s an honor to be a physician, to do your best to make a difference in someone else’s life,” said Dr. Hattenhauer. “I want today’s students to feel just as elated as I did when that acceptance letter arrives in their mailbox. We cannot allow their financial situation to hold them back.”