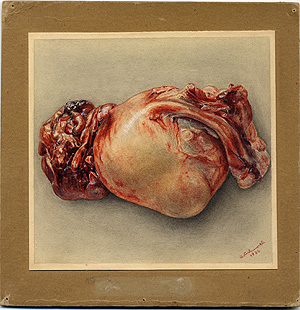 Clarice Ashworth Francone was born March 24, 1901, in Rochester, Minnesota. Fresh from high school, she went to work in the art department of the Mayo Clinic. After attending the Art Institute of Chicago, she went to Johns Hopkins to study under Max Broedel, who was widely considered to be the father of medical illustration.

Francone came to Oregon in 1929 and began work at the University of Oregon Medical School (now OHSU) in 1936. In addition to preparing charts and diagrams for faculty and students, Francone illustrated several monographs authored by faculty, including Stanley Jacob’s Structure and Function in Man, William Howard’s Atlas of Operative Dentistry, and E.E. Osgood’s Atlas of Hematology. Before retiring in 1969, Francone was asked to contribute samples of her work to the Archives of Medical Visual Resources at the Countway Library, Harvard University. In addition to the Clarice Ashworth Francone Collection, which was donated to the OHSU Historical Collections & Archives by Francone, many other collections in the archives contain originals and reprints of her illustrations.

A few senior faculty on campus still remember Francone, who has been called “one of the last of the red hot mamas.”

To learn more about Clarice Ashworth Francone and her work, visit the physical display in the Main Library or the virtual exhibit on the Historical Collections & Archives web site at http://www.ohsu.edu/library/hom/exhibits/.

Materials will be on display through September 2010. Questions about the exhibit or the collections can be addressed to Sara Piasecki, History of Medicine Librarian (503-418-2287, piasecki@ohsu.edu) or Karen Peterson, Archivist (503-494-3239 or peterska@ohsu.edu).