The Burundi clinic where OHSU MD alum Dr. Dziwe Ntaba is medical director has attracted worldwide attention, thanks to bestselling author Tracy Kidder’s 2009 book “Strength in What Remains.” The School of Medicine recently contacted Dr. Ntaba to learn more about his work.
July 13, 2010 Portland, OR

After 36 hours of stalled labor and fetal distress, a young expectant mother was brought from the dirt floor of her mud-hut to a remote clinic in Burundi where Dziwe Ntaba, MD, a 2001 graduate of the OHSU School of Medicine, presided as medical director. 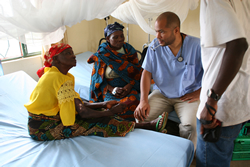 The child was delivered, Dr. Ntaba remembers, with “a frightening blue coloration” and was neither moving or breathing. Lacking any advanced life support equipment, he suctioned out the baby’s airway with a syringe and IV catheter, started CPR and improvised a rapid sequential application of bed-sheets, pre-warmed by a coal heated iron. “The baby [named Michele and shown in the accompanying photo] slowly started to breathe, and then turned a healthy pinkish color. And, finally, she let out a faint but miraculous cry.” Her mother was also resuscitated. Mother and child were put on a course of antibiotics. And today the miracle at Dr. Ntaba’s hands is that both survived and are doing well in a country where one in 12 women die due to pregnancy-related complications, and one in five children are dead before they reach  age five, almost all from easily preventable causes.

The clinic where this life-giving miracle took place is in a village called Kigutu on a lush plateau overlooking Lake Tanganyika, in Burundi, Central Africa. Run by Village Health Works (VHW), it treats the ills of a poverty-stricken population ravaged by the scourges of AIDS, TB, malaria, and malnutrition, all of which have been exacerbated by years of a brutal, ethnically driven civil war which ended only recently.

A policy in Burundi of incarcerating those who can’t pay their medical bills compounds the problem by deterring people from getting the care they need even when they are deathly ill. “Oftentimes patients who need interventions beyond our capacity at our clinic adamantly refuse to be transferred,” said Dr. Ntaba. “I will never forget the time a patient vomiting blood told me she would rather die in my hands than take her chances at the regional hospital,” said Dr. Ntaba.

The Kigutu has attracted worldwide attention in Tracy Kidder’s 2009 book Strength in What Remains. VHW, which built the clinic and plans others, is the brainchild of Deogratias Niyizonkiza, the hero of Kidder’s book and a native of Burundi.

Dr. Ntaba first met Deogratias, or Deo, on 9-11 at the Harvard School of Public Health where both were students. Deo spoke that fateful day at an informal gathering. “We had come together to collect our thoughts after the events of that terrible morning,” Dr. Ntaba recalled. “Deo shared some remarkable insights on the grieving process based on his own traumatic experiences in Burundi and Rwanda and spoke with great clarity about the potential dangers of recurring cycles of violence.” 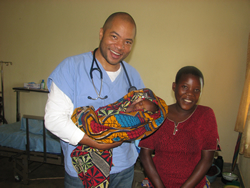 Kidder’s book is a chronicle of Deo’s odyssey – his terrifying months on the run in 1994 from the murderous violence raging across Burundi and neighboring Rwanda, his escape to the United States without speaking English and only $200 in his pockets, his journey from homelessness on the streets of New York City to graduation from Columbia University, enrollment at Harvard School of Public Health, and Dartmouth Medical School, and the ongoing battle to expunge the frightful memories that dogged him.

It was at Harvard that Deo and Dziwe (pronounced Zee-way), first encountered Dr. Paul Farmer, the subject of an earlier Kidder book, Mountains Beyond Mountains. Dr. Farmer’s two decades of providing medical care to the poor in Haiti through his Partners in Health (PIH) organization inspired both men. Deo created VHW as a PIH sister organization.

In 2006, at Deo’s invitation, Dziwe visited Burundi, judged the poorest country on the planet by the World Bank, and saw a population “gripped with a sense of hopelessness and despair.” Dziwe needed no persuasion to throw in his lot with his friend Deo. Having just earned his board certification in Emergency Medicine, Dziwe was able to spend close to two years volunteering his services in Burundi, and getting the clinic off the ground. He recently joined the emergency department staff at North Memorial Medical Center in Hennepin County, Minnesota, to start earning an income again having gotten engaged to be married.

Dziwe, who graduated from Macalester College before coming to OHSU, spent much of his childhood in Malawi, some 700 miles south of Burundi. His father, also a doctor, was Malawi’s minister of health. “Dziwe always had it in his mind when he was here that he was going to do something back home,” recalled Leslie D. Garcia, OHSU Vice Provost, Diversity.

Dziwe was drawn to OHSU in part, he says, by an opportunity to precept in an HIV  clinic run by Mark Loveless, MD, MHA, Associate Professor of Medicine in the OHSU Department of Public Health and Preventive Medicine. “This was at a time,” said Dr. Loveless, “when the full extent of the HIV epidemic in Sub-Saharan Africa was being recognized but before the global community was mobilized.” He helped Dziwe understand the virology and immunology of HIV, and Dziwe provided him, he remembers, with “a much better context for understanding the true complexity of the problem from his background in Malawi.”  Dziwe described Dr. Loveless as “the most amazing clinical mentor I could hope to ask for” and was one of the people at OHSU who had the biggest influence on him, he says. 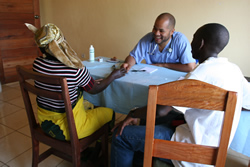 Associate Dean for Student Affairs Molly Osborne, MD, remembers Dziwe as being “very bright, very soft spoken, very modest, and very professional.” Another faculty member predicted, “He will make an outstanding, compassionate physician.” Dziwe pitched in on a multitude of community projects when he was at OHSU, doing everything from soliciting medical supplies for the victims of Hurricane Mitch to developing a monthly lead testing clinic in Portland and lecturing high school classes on HIV/STD prevention. Not surprisingly, he was awarded the OHSU Student Government’s Community Service award.

Since its opening the VHW clinic has ministered to the primary care needs of more than 28,000 patients, many coming from as far away as Tanzania and the Congo. “Patients will literally walk for days on end to be cared for at our clinic,” said Dziwe. Kigutu, which happens to be Deo’s home village, is in an area heavily populated by people who fled from the violence elsewhere in the country. In addition to a handful of Burundian nurses and doctors, VHW now employs more than 50 local community health workers. Specialty clinics treat HIV, TB and malnutrition. A 30-bed women’s health pavilion is under construction. Sustainable farming methods are being promoted as part of an effort to address malnutrition. And VHW supplies clean potable water to Kigutu and surrounding communities. “VHW is helping to turn Burundi’s focus from strife and hostility to community development and dignity,” Dziwe said.

Dr. Farmer – whose organization, partly at Deo’s urging, now works in Rwanda, Malawi and Lesotho – has often visited the Kigutu clinic. PIH provides hands-on guidance and acts as VHW’s fiscal agent. What stands out for Farmer, Dziwe says, is “the unsurpassed level of community participation.” That was evident in a story Kidder tells in the epilogue of his book. One villager, put off by a Belgian construction company’s $50,000 estimate to make a six kilometer road to the clinic passable, said, “You will not pay a penny for this road. We become so much sick because we are poor, but we are not poor because we are lazy.” The next day 166 people showed up with pickaxes, hoes, machetes and other tools. When the Belgian company followed up, they were shocked to find the road had been completed. “Who did it?” they asked. “We’re the only road construction company in the entire region!” Deo replied, “Not anymore.”

The clinic gets outside assistance from a variety of groups. The Pershing Square Foundation granted funds for the women’s pavilion. FACE AIDS, a U.S. student organization, is helping raise money for operating costs. The single biggest individual donor is Sharon McKenna, the former nun who helped Deo get back on his feet in his darkest days after arriving in Manhattan, a significant character in Kidder’s book.

The clinic’s unmet needs, however, are enormous. “Our entire imaging capacity is a single portable ultrasound machine,” said Dziwe. Still, the community health worker model of daily home visits, directly-observed therapy and social support that VHW is building provides a level of what he calls “pragmatic solidarity with patients” that is hard to achieve in the U.S., even with all of its amazing medical facilities.