July 15, 2010 Portland, Ore.
Eight faculty members of the OHSU School of Medicine have been published in seven articles in Academic Medicine from 2009 to the present. Academic Medicine is the official, peer-reviewed journal of the Association of American Medical Colleges. Authors’ works are subjected to rigorous criteria when being considered for publication. OHSU faculty featured in Academic Medicine contribute to a global forum of pertinent issues in their respective fields, and help fulfill OHSU’s mission of educating the next generation of health care providers and scientists. Below are summaries of the seven articles, in chronological order. OHSU faculty members’ work appearing in Academic Medicine will be a regular feature of the School of Medicine news site; please send abstracts to somdeansoffice@ohsu.edu.

A time for change: an exploration of attitudes toward part-time work in academia among women internists and their division chiefs 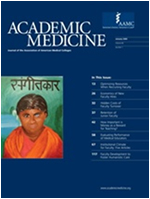 Increasing numbers of clinicians desire part-time work, and many will opt out of academic medicine if the barriers to part-time work are too great. Rebecca A. Harrison, MD, FACP, Associate Professor, Department of Internal Medicine, and Jessica L. Gregg, MD, PhD, Associate Professor, Department of Medicine, investigated the experiences of part-time academic physicians and their division leaders to understand how each identified the negative and positive consequences of part-time work. In 2004, the authors interviewed the Society of General Medicine Horn Scholars Program applicants and their division chiefs. All applicants were female junior faculty clinician educators in academic internal medicine from seven institutions. All division chiefs were male full-time faculty members. Applicants and division chiefs identified both negative and positive consequences of part-time work; both groups tended to frame part-time work as a decision to “work less” or to “work differently.” The authors concluded that as more academics consider part-time work as a tool to achieve work-life balance, academic medicine will be challenged to develop creative models for integrating successful part-time physicians, or it will lose that segment of the workforce. This study’s findings suggest that one such model may require that physicians and their leaders re-conceptualize work altogether. Their article appeared in the January 2009 issue of Academic Medicine.

Synergies and Distinctions between Computational Disciplines in Biomedical Research: Perspective from the Clinical and Translational Science Award Programs 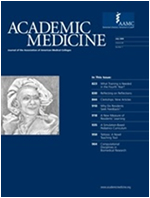 Clinical and translational research increasingly requires computational and network resources. Projects may involve multiple computationally oriented groups including information technology (IT) professionals, computer scientists, and biomedical informatics specialists. However, many biomedical researchers are not aware of the distinctions among these complementary groups, leading to confusion, delays, and suboptimal results. Although written from the perspective of Clinical and Translational Science Award (CTSA) programs within academic medical centers, this article addresses issues that extend beyond clinical and translational research. William R. Hersh, MD, Professor and Chair, Department of Medical Informatics & Clinical Epidemiology, and co-authors describe the complementary but distinct roles of operational IT, research IT, computer science, and biomedical informatics using a clinical data warehouse as a running example. In general, IT professionals focus on technology. Computer scientists focus on general issues of computation such as designing faster computers or more efficient algorithms, rather than specific applications. In contrast, informaticians are concerned with acquisition and analysis of data, information, and knowledge. Biomedical informaticians draw on a variety of tools, including (but not limited to) computers, to solve information problems in health care and biomedicine. The authors recommend considering administrative structures that can help to maximize the benefit of biomedical informatics to the entire spectrum of research within academic health centers. The article appeared in the July 2009 issue of Academic Medicine. 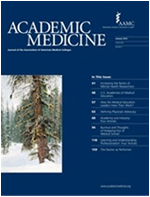 According to a report by The Institute of Medicine (IOM), 50 percent of morbidity and mortality in the United States is associated with social and behavioral sciences (SBS) factors. Yet, SBS is inadequately taught in medical schools today. A multi-school collaborative, including Patty A. Carney, PhD, Professor, Department of Family Medicine and Department of Public Health & Preventive Medicine, and Rebecca Rdesinski, MPH, MSW, Instructor, Department of Family Medicine, explored whether the Association of American Medical Colleges Graduation Questionnaire (GQ) could be used to study changes in the six SBS domains identified in the IOM report. Summary data were pooled from nine medical schools for 2006 and 2007, representing 1,126 students. Data were generated on students’ perceptions of curricular experiences, attitudes related to SBS curricula, and confidence with relevant clinical knowledge and skills. The authors found that detecting SBS changes associated with curricular innovations would require a large collaborative of medical schools, as many as 34. Using a national measure (the GQ) to assess curricular innovations in most areas of SBS is possible if enough medical schools were involved in such an effort. The article appeared in the January 2010 issue of Academic Medicine.

The generalist disciplines in American medicine one hundred years following the Flexner report: A case study of unintended consequences and some proposals for post-Flexnerian reform 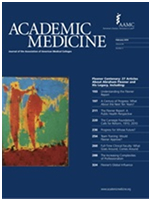 Abraham Flexner’s analysis in 1910 of medical education in the United States was largely responsible for the adoption of the academic medical center as the focal point of medical school teaching, research, and clinical activities; it was written, however, for a society one hundred years past. How might Flexner’s influential report be interpreted today? John W. Saultz, MD, Chair and Professor, Department of Family Medicine, and Assistant Dean, Primary Care Education, and his colleagues from the University of California and University of Washington, aimed to answer this, and other, questions. They describe how workforce changes – especially the proliferation of specialties – along with the evolution of health care financing, have led to a system that affords the most scientifically advanced and potentially efficacious care in the world, yet profoundly fails to ensure affordability and equitable access and quality. The authors propose that both health care system reform and medical education reform are needed now to restore economic viability and moral integrity, and that a key element of this process will be to rebalance the generalist and specialist composition of the physician workforce. They suggest that post-Flexnerian reform of medical education should include broadening medical student selection criteria and reshaping curriculum to address 21st century patient care. The article appeared in the February 2010 issue of Academic Medicine. 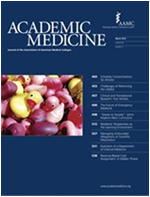 Compelled by the lack of familiarity between practice-based research networks (PBRNs) and Clinical and Translational Science Award (CTSA) sites, Lyle J. Fagnan, MD, Associate Professor, Department of Family Medicine and Network Director, Oregon Rural Practice-based Research Network, conducted a study to determine how these two entities might further collaborate. PBRNs – groups of primary care practices committed to collaborating on practice-relevant research – are unfamiliar to many CTSA leaders. Conversely, the CTSAs, as new National Institutes of Health-funded research structures designed to transform clinical research, are unfamiliar to many PBRN directors. The authors, who also include faculty from Case Western Reserve University Clinical and Translational Science Collaborative in Cleveland, Ohio, examined the extent to which these programs have congruent goals and expectations. According to respondents, CTSAs looked to PBRNs for access to patients and expertise in engaging communities and clinical practices. PBRNs reported seeking stable infrastructure support and greater collaboration and visibility in the academic research community. The authors conclude that with fewer than three years of experience, the relationship between PBRNs and CTSAs remains in the discovery phase. If these collaborations prove mutually beneficial, they may advance the community engagement goals of many academic health centers. The study results appeared in the March 2010 issue of Academic Medicine.

The future of emergency medicine: An evolutionary perspective

The growth of emergency medicine (EM) over the past 50 years has been substantial. EM is now the fourth most popular choice of specialty chosen by graduating U.S. medical students, and is the focal point of clinical care and research on time-sensitive medical conditions. With this in mind, Daniel Handel, MD, MPH, Assistant Professor and Director of Clinical Operations, Department of Emergency Medicine, and co-authors reviewed the growth of EM and the factors that will shape its future – in particular, cost, quality and technology. They assert that the current inefficient conditions of emergency departments (EDs) contribute to a tension between optimal and actual ED care. ED personnel are distracted by the temporary boarding of admitted patients for whom a bed is not ready, and struggle to balance these conditions with newly arrived patients who’ve undergone trauma and require acute interventions. In conclusion, the authors believe the reduction or elimination of boarding will enhance education and research within EDs and will contribute to an efficient system of high-quality EM services. The article was published in the March 2010 issue of Academic Medicine. 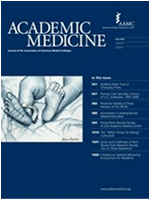 The patient-centered medical home (PCMH) is rapidly becoming part of the medical lexicon, and in turn, intrinsic to medical college curricula. In order to explore the extent to which third-year medical students are exposed to the elements of the PCMH, John W. Saultz, MD, Chair and Professor, Department of Family Medicine, and Assistant Dean, Primary Care Education, and Patty A. Carney, PhD, Professor, Department of Family Medicine and Department of Public Health & Preventive Medicine, conducted a survey of 104 ambulatory teaching practices that host students from nine U.S. medical schools. The results of the survey indicate that the practices were primarily community-based, single-specialty clinics, more than half of which were part of integrated health systems. Electronic health records (EHRs) were in place in 58 percent of the sample; 14 percent of EHR-equipped sites did not allow access to medical students. The authors conclude that primary care transformation toward the PCMH is well under way, and the transformation is having important effects on medical student education. The article was published in the June 2010 issue of Academic Medicine.