Dr. Trunkey: An advocate for injured patients, a legend in trauma care 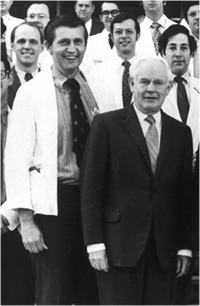 Trauma surgeons thrive on a certain level of chaos; part of the job is providing care for patients with complex, critical injuries. Add crashing scud missiles and young soldiers, often in their twenties, with double leg amputations, or both eyes removed from AK47s, or worse – injuries too severe to allow even the best surgeon to save their life – and the working conditions become extraordinary.

Yet these are part of the job description for the active combat military surgeon. And Donald Trunkey, MD, Professor Emeritus and former Chair, Department of Surgery, has seen them all.

"Sometimes it's like putting humpty dumpty back together again," said Dr. Trunkey. "We don't always win, but when we do, it's a real upper. I wouldn't trade it for anything."

"Dr. Trunkey provided the impetus to change the role of the military in trauma and medicine," said Pat Southard, MN, JD, Associate Professor, Department of Surgery. "He's responsible for the last 15 years of improvements in how the military practices trauma care during combat."

During Operation Desert Storm and Desert Shield, Dr. Trunkey was stationed in Riyadh, Saudi Arabia, as chief of surgery and chief of professional medical staff of the U.S. Army's 50th General Hospital. He dealt with a number of operational and cultural obstacles that prompted him to publish a commentary in the March 1993 edition of Archives of Surgery called "Lessons Learned," a document that paved the way for how the U.S. Department of Defense trains its trauma personnel today.

Dr. Trunkey's influence on trauma care is not confined, however, to the military sphere, but is based on a persistent advocacy for optimal treatment of injured patients. 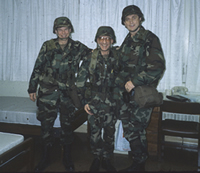 "The critical moment in Don Trunkey's career was when he published a paper in 1979 on death rates of trauma patients in Orange County (Calif.), compared to those in San Francisco County," said Richard Mullins, MD, Professor, Department of Surgery. "That paper was a bombshell. It was one of the earliest, most persuasive pieces of evidence on the effectiveness of trauma centers."

With this professional catalyst in place, Dr. Trunkey began appearing at conferences around the world to speak about trauma care. His message was unwavering: injured patients deserve the best trauma care available, and the best care includes an organized trauma system.

"To put it bluntly, Dr. Trunkey would show up at a major meeting and say, 'You're doing a terrible job, and you ought to be embarrassed,'" said Dr. Mullins. "I bet 50,000 people have met Don Trunkey, and they remember that experience. He's inspired people and really made a difference."

At 73, Dr. Trunkey is not slowing down. Since 2006, he's traveled six times to Landsthul, Germany, to provide relief to military surgeons working at the U.S. Army's hospital there. It's a place he's familiar with, in part because of a fateful week during Desert Storm. Gen. Norman Schwarzkopf came to Dr. Trunkey with an ill general, who Dr. Trunkey diagnosed with acute cholesystitis – he needed his gall bladder out immediately. After hearing the diagnosis, Gen. Schwarzkopf dismissed the lower general and ordered him to Landsthul for the operation. Without hesitation, Dr. Trunkey told the renowned commander he was making a mistake, which landed him on Gen. Schwarzkopf's private Learjet to Germany to perform the procedure himself. 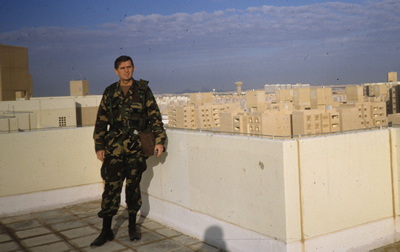 The recovered general reported back to duty five days later, and subsequently arranged for Dr. Trunkey to receive a bronze star. "Frankly, Dr. Trunkey is the only man I know who would be in that situation and say to Gen. Schwarzkopf, 'Sir, you're making a mistake,'" said Dr. Mullins. "And then he actually proved him wrong. That epitomizes Don Trunkey."

Regardless of his international recognition, though, providing excellent care is what motivates Dr. Trunkey. He spoke recently with the father of an injured soldier whose life Dr. Trunkey helped save. "He's been accepted into Harvard law school, and he's got a special wheelchair fitted to the bottom of his torso. It makes me want to cry. His father is so grateful that his son is alive; it's amazing."

FACT:
Dr. Trunkey was featured on an episode of "Operation: Lifeline," an early reality TV show, in 1978.