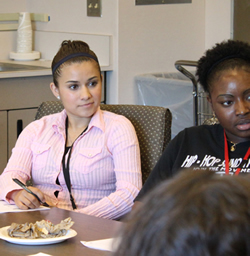 Brenda Olmos, a 20-year-old student at the University of Oregon, says her desire to become a physician was cemented by frequent visits to the pediatrician as a child. “Sometimes it felt like I lived there because of how often I went to see him,” she said. “The day that he did not charge my parents for my medications because they could not afford it was the day I knew I wanted to help people as he had done for so many years.”

Olmos grew up around gang violence and poverty in Los Angeles, making it hard to stay in school and be dedicated to learning. The first in her family to attend college, she is currently a double major in Human Physiology and Biology in the Honors College at UO and wants to apply to the MD/PhD program at OHSU.

Since its beginnings over five years ago, the Equity Summer Research Program has offered college undergraduate students who have faced and overcome significant economic disadvantages the opportunity to spend eight to 10 weeks over the summer working with School of Medicine faculty and graduate students in a research setting. As well as conducting their own research project, students participate in weekly seminars and meetings, give an oral presentation on their research and receive mentoring appropriate to their career goals from OHSU faculty.

In the past, participants were typically focused on pursuing master's degrees in medical research. As the applications began to roll in for 2010, however, it was clear that news about the program had spread much further this year.

“The depth and talent of the application pool made us wonder if we weren’t missing an opportunity to better prime the workforce pipeline,” said Leslie Garcia, OHSU Vice-Provost for Diversity. “We decided to expand the program by adding an MD track for undergraduate students interested in becoming physicians.”

The hunch proved to be very much on target. Drawn from almost 100 applicants, 14 students are enrolled in this year’s program, six of them in the newly-created MD track. Eleven of the scholars are women, and the group’s ethnicities include African-American, Asian, Hispanic/Latino, European and multi-racial. They are currently studying at universities and colleges in Florida, Michigan, Washington and North Carolina as well as Oregon.

Brenda Olmos’s research is based in the Department of Radiation Oncology, where she is studying three-dimensional CT scans of hepatic carcinomas under the mentorship of James Tanyi, PhD, Assistant Professor. “We’re looking at differences in dosage calculations for radiation between patients whose scans include a contrasting agent and those whose scans do not,” she said. “This experience has given me a great step forward in my goal of applying to the MD/PhD program at OHSU, and learning what it will take for me to help others the way my pediatrician helped me.”

PICTURED: Brenda Olmos (l) and fellow scholars listen to a presentation from Dr. Cindy Morris on the admissions process for the OHSU School of Medicine.