The OHSU Parkinson Center of Oregon (PCO), in partnership with The Michael J. Fox Foundation for Parkinson's Research (MJFF), hosted a research roundtable for patients and the general public at the OHSU Doernbecher Children’s Hospital on Sunday. 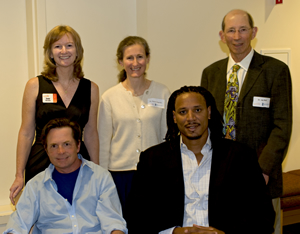 Panelists presented information about the latest Parkinson’s disease research at OHSU and MJFF, as well as research themes being studied nationally. Of particular interest was a MJFF-funded study currently underway at OHSU looking for biomarkers of PD, and clues to progression of the disease. The results of this study have the potential to dramatically change treatment of this neurological disorder.

The roundtable marked the commencement of many star-studded PD awareness and fundraising events, with Brian Grant’s “Shake It Till We Make It” gala held later that evening and a golf tournament the following day. Both events benefited the Michael J. Fox Foundation.