Chance meeting in Missouri lures Californian to study in Oregon 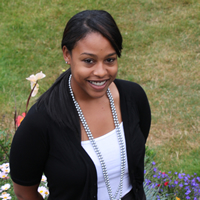 Dejeunee Ashby’s journey to OHSU began at an exhibit table in a convention hotel in St. Louis, Mo.

A psychology major at UC Berkeley, Dejeunee was attending the national conference of the Student National Medical Association (SNMA), the nation's oldest and largest independent, student-run organization focused on the needs and concerns of medical students of color. It was there that she met Nicole Gordon, MD ‘09 and Ari Perlstein, MD ‘09, who were then medical students at OHSU.

“It was an instant connection,” said Dejeunee. “Their enthusiasm for OHSU stood out across the room.”

Dejeunee had her career mapped out since high school. “I took a college psychology course while still in high school, and it was during the discussions about the brain and the mind that I knew I wanted to become a physician.” She credits her parents with playing a formative role in her education, along with her classmates and faculty in the Biology Scholars Program at UC Berkeley. “They were always behind me,” she said.

Prior to starting medical school at OHSU, Dejeunee worked as a behavioral therapist with children with autism for three and a half years. She gained experience working in in-home settings as well as shadowing the medical director of the autism clinic at the UCLA Medical Center. “I think I am headed towards a neurology specialty,” she said.

She is both excited and anxious to begin the four-year MD degree program. “Once I have this degree I know I can help so many others,” she said. “It is the only thing I’ve wanted in my life.”

From lumber mill to medical school, with a parent’s guidance

The son of a physician, Nick Blake heard one question probably more than any other as he grew up: “So, are you going to be a physician like your dad?”

“It was such an automatic question that I ended up dismissing it just as automatically, without ever seriously thinking about it,” he said.

Instead Nick, who was born in Boise, Idaho but who grew up in rural Sweet Home, Ore., completed high school and then went on to Oregon State University to study engineering. The first two years did not go well. “I hated it and I wasn’t very good at it,” he said. Married at the end of his second year, he decided to quit college. He and his wife returned to Sweet Home, where he found a job operating a planer chain in the Lebanon lumber mill. “It was very satisfying working with my hands,” he said, “even when the Oregon rain made the lumber two or three times heavier than it was when it was dry.”

Then, like many before and since, he found himself laid off and with little in the way of opportunity. “One night my father told me that he had never wanted to be one of those fathers who pressured their children to do what they had done,” said Nick. “And at that moment I started to realize that maybe I could become a physician.” He enrolled at Linn-Benton Community College, beginning with Biology 201. “I loved it,” he said.

Nick sees himself returning to a rural practice. “It’s very attractive because of the people and the need,” he said. “I like medicine and I have the ability to become a physician. I want to share that gift with as many as I can, and wherever the need is greatest.” 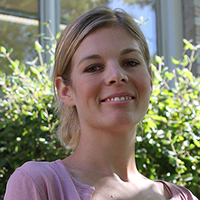 Merrit Hoover is one of three students to have already received a doctoral degree. Previously a scientist with NASA, she worked on an anecdotal phenomenon known as “space fog” that astronauts report while in microgravity conditions. “It happens when astronauts exit earth’s atmosphere and experience difficulties focusing and doing ordinary tasks,” she said. “I was part of a team that investigated whether adapting to altered sensory environments (such as microgravity) reduces the availability of cognitive resources for other tasks.”

Her research on cognition both at NASA and while earning her PhD in Cognitive Psychology at UC Santa Cruz are the unique experiences Merrit brings to the class of 2014. As she enters medical school, she has her eyes on pursuing academic medicine, and hopes to use her scientific training throughout her career as a physician.

“I think my PhD really helped me to understand some of the basic functions of individual minds. I'm hoping that will help me understand how my future patients will react to prognoses, and how to best tailor treatment advice to individual patients,” she said.

As a physician, Merrit is eager to embrace the technology age, and equally motivated to educate the population on preventive medicine, a goal shared by many. “We are on the cusp of being able to easily disseminate a tremendous amount of information to the populous, so they can make informed, careful decisions about their own treatment and healthcare,” she said. “And that's hugely exciting.”

David Simmons trained as an opera singer at Oberlin College and the University of Indiana, and had a successful career performing character tenor roles in classical opera and in musicals, on stages from the Arlene Schnitzer Concert Hall to Carnegie Hall.

It took a major effort – one he described as “nuking my entire life to that point” – to pursue the career he had promised himself as an eight-year-old. “I’d always wanted to be a fighter pilot, like my dad,” he said. “My first pair of glasses made me realize that fighter pilot was no longer an option.” His desire to become a doctor “came primarily from my mom, an R.N., and her nursing school roommate, Darlene, and literally hours spent poring over mom's Taber's encyclopedic medical dictionary,” he said.

Leaving his music career, he enrolled as a 37-year-old pre-med freshman at Oregon State University. “It was terrifying,” he said.

As an older, single parent (he shares joint custody with his children’s mother) he feels that he can bring a perspective that might not otherwise be present in the classroom. He also feels that his interest in working with the underserved is better informed by his experiences as a musician.

“Employment is not always secure,” he said. “I’ve been homeless a couple of times.”

He is excited to be entering medicine in this era of health care reform. “This is an opportunity to deliver health care to folks who have not been represented for decades. It’s about folding the marginally served into the health care system.”

As well as his family, his mentors include an older brother who is a radiologist and Tanya Page, M.D., Assistant Professor, OHSU Department of Family Medicine, whom he describes as “an incredible source of inspiration and information.”

“I am so unbelievably ready to put on that white coat,” he said. “Dozens of others have helped me to reach the base of the mountain. I have a responsibility to them.” 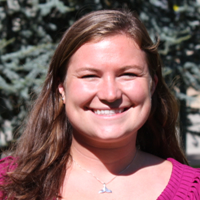 Watching a patient with metastatic bone cancer slowly succumb to his disease while working at a hospital as a nuclear medicine technologist, incoming student Kristiann Kinsman had a life changing moment.

“When we finished scanning him, he always wanted to see the images,” she said. “He could tell by looking at the images that his cancer was not responding, but he was a resilient person and was not going to give up the fight.” While Kristiann had always wanted to be involved in health care professionally since she was a teenager, her limited ability to help this patient overcome his cancer pushed her toward becoming a physician.

Kristiann was born and raised in Klamath Falls, Ore., and credits a health occupation course in high school, where she learned about medical professions, as launching her in the direction of medicine. She graduated with a BS in Nuclear Medicine and a minor in Business from the Oregon Institute of Technology (OIT).

When it came to choosing a medical school, she was drawn to OHSU for its strong curriculum and focus on primary care. Kristiann is eager to share her knowledge of nuclear medicine and experiences with diagnostic imaging with the class of 2014.

As for her future, Kristiann, who loves living in a small community, has not ruled out returning to her home town. “I can see myself practicing in Klamath one day. My family still lives in Klamath and I know I want to be close to them when I am done with school,” she said.

Tags School of Medicine Education
Previous Story A passion for rural medicine rooted in an OHSU experience Next Story Tomorrow's physicians: From all walks of life