Paper of the Month: New light shown in the living brain by diagnostic drugs in MRI

This month's featured paper is from the Journal of Magnetic Resonance, and is titled "Dynamic-contrast-enhanced-MRI with extravagating contrast reagent: Rat cerebral glioma blood volume determination." The research was conducted by an investigative collaboration that included Charles Springer, PhD, Director Emeritus, OHSU Advanced Imaging Research Center and other scientists at OHSU. The full author list is provided at the end of this summary. 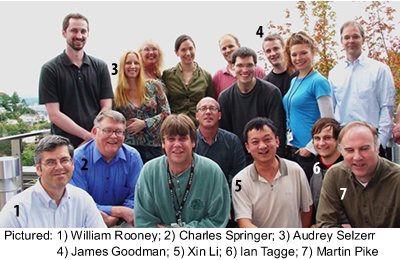 An important research area investigates the use of diagnostic drugs to make quantitative measurements of "biomarkers" (properties) of various pathologies using modern, noninvasive medical imaging techniques. These drugs can be used to diagnose the presence, extent, and stage (as well as the precise location) of disease, with no intervention to the body except for intravenous injection of the drug. These types of drugs are known as radiotracers in nuclear imaging (for example, positron emission tomography, or PET), dyes in computed tomography (CT) and optical imaging, and contrast agents in ultrasound (US) imaging and magnetic resonance imaging (MRI). The use of such drugs is in the forefront of modern methods for early diagnosis of cancer, timely monitoring the effectiveness of cancer therapy, and efficient discovery of new, effective anti-cancer therapeutic drugs.

A vital biomarker characterizing a malignant cancer is the extent and spatial variation of its blood vessel supply, its tumor blood volume (TBV) fraction.  A TBV "map" can tell a physician much about the nature and stage of a tumor, and quickly whether or not it will respond to a chosen therapy. The TBV is usually determined by a computer analysis of the time-course of the contrast agent (CA) passage through each part of a tumor after the CA injection into the blood. It is conventionally thought that the TBV map can be produced using only CA molecules constrained to remain within the blood (intravascular). However, such molecules consequently stay in the blood circulation, and thus the body, for a long period of time (days). There is a class of very common MRI CAs [gadolinium-based CA (GBCA) molecules] that pass rapidly out of blood vessels (extravasation) and then back into the blood (intravasation) to be quickly eliminated through the kidney and the urine. These have lifetimes in the body typically one tenth that of an intravascular CA.

It has been commonly thought that their rapid extravasation prevents small GBCA molecules from being used to obtain MRI TBV maps. However, a collaborative effort between the OHSU Advanced Imaging Research Center (AIRC) and the OHSU Blood-Brain Barrier Program has shown that with the proper computer analysis of the time-course of the GBCA passage through the tumor ("pharmacokinetics"), one can in fact map the TBV.  The researchers have shown this for glioma tumors implanted within rat brains, using the ultra-high magnetic field small animal MR instrument in the AIRC W. M. Keck Foundation High-Field MRI Laboratory.  The 12 Tesla instrument utilized in this study was funded in part by a $1.75 million grant from the W. M. Keck Foundation.

Over almost six decades, a mathematical pharmacokinetic model, known as the Standard Model (SM), has been developed for analysis of radiotracer and dye time-course data. Initially, investigators around the world applied the SM simply to MRI pharmacokinetic data. However, the OHSU AIRC researchers have realized that the molecular nature of MRI pharmacokinetics is fundamentally different from that of nuclear, CT, optical, and US pharmacokinetics. In the latter, the CA is detected directly. In MRI, however, the CA is detected via its effect on the water proton MR signal with which the image is made. While in the other imaging techniques the tracer molecule is also the signal molecule, in MRI the CA is the tracer molecule but the signal molecule is water. This adds tremendous richness to MRI pharmacokinetics that is not accessible to tracer pharmacokinetics. The OHSU AIRC investigators have published a number of papers elaborating the novel Shutter-Speed Model (SSM) to properly account for this molecular difference.  Besides requiring the SSM for the accurate TBV determination in the cerebral glioma, this paper also presents further evidence for clear differences between the SM and SSM. 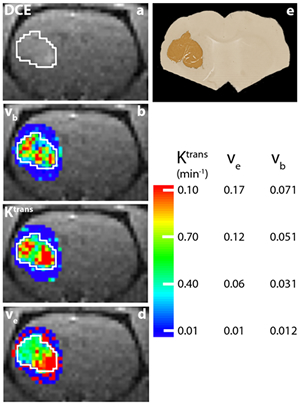 Pharmacokinetic parametric maps of a rat cerebral glioma are shown [the TBV map is in panel b].  Note how well the maps agree with a histological slice with a conventional stain for the tumor [panel e].  While the MRI maps are obtained from the rat in vivo, the histological slice is obtained post-mortem.

The School of Medicine newsletter spotlights a recently published faculty research paper in each issue. The goals are to highlight the great research happening at OHSU and to share this information across departments, institutes and disciplines. A list of all papers compiled by the OHSU Library and published by OHSU faculty during the prior month is also provided here. The monthly paper summary is selected by Associate Dean for Basic Science Mary Stenzel-Poore, PhD, and reviewed by Dean Mark Richardson, MD, MBA, and Vice President/Senior Associate Dean for Research Dan Dorsa, PhD.
Tags School of Medicine Research
Previous Story School of Medicine welcomes Class of 2014 Next Story FPP involved in two new care coordination demonstration projects