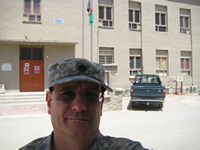 Martin Schreiber, MD, Professor, Department of Surgery, credits his experience at OHSU, along with his membership on the American College of Surgeons Committee on Trauma, as informing his work overseeing "the most complex and largest trauma system ever created." Dr. Schreiber has completed a three-month appointment in Afghanistan as Director of the United States military's Joint Theater Trauma System (JTTS), in which he was responsible for the organizational infrastructure for trauma across all of Iraq and Afghanistan.

"We are responsible for making sure that every injured war fighter has the best opportunity for survival and a meaningful recovery," said Dr. Schreiber, who is also Director of the Division of Trauma, Critical Care and Acute Care Surgery. "This includes ensuring each trauma facility has adequate resources and appropriate manpower, and that JTTS clinical practice guidelines are being followed."

The wars in Iraq and Afghanistan have influenced the way civilian trauma care is delivered. Dr. Schreiber said resuscitation techniques that have been shown to decrease bleeding, the use of blood component therapy in ratios that replicate whole blood, hemostatic dressings and a resurgence in using tourniquets have been popularized in the Iraq and Afghanistan conflicts.

Spanning three continents, the U.S. Army, Navy, Marines and Air Force, plus NATO forces, the Joint Theater Trauma Registry lists over 65,000 trauma patient entries, 20,000 of which are U.S. military patients. The case fatality rate throughout Operation Iraqi Freedom and Operation Enduring Freedom is less than 10 percent, the best ever recorded in human warfare.

Another aspect of trauma care being used by military clinicians is the concept of "last in, first out," which means patients requiring a massive blood transfusion receive the newest blood, rather than the traditional use of the oldest blood to avoid expiration. Dr. Schreiber said data increasingly suggests the use of older blood is associated with higher mortality and more complications. "Because of randomized studies, we now know that whole blood is the best way to resuscitate these patients," said Donald Trunkey, MD, Professor Emeritus and former Chair, Department of Surgery. "Transfusions should consist of whole blood and should be as fresh as possible." 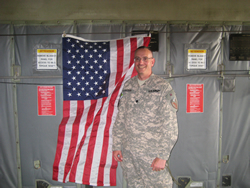 In theater, survival in patients requiring massive transfusion exceeds 90 percent, which is higher than ever reported by a civilian trauma center. This is particularly impressive considering the austere environment in which care is delivered and the complexity of managing patients who are being transferred thousands of miles from the dust in Iraq and Afghanistan to U.S. military treatment facilities in just a few days.

"[Dr. Schreiber is] very interested in research and in trying to find something that makes a difference in medicine," said Karen Kwong, MD, Clinical Associate Professor, Department of Surgery and a surgeon at the Portland VA Medical Center. She is Dr. Schreiber's wife and recently returned from a medical relief mission in Haiti. "By overseeing military trauma systems and ensuring they're using the latest research, he sees the practical nature of research he's already doing."

Dr. Schreiber's leadership role for the JTTS differed from his deployment to Iraq in 2005 as Chief of Trauma for the 228th Combat Support Hospital, where he acted primarily as a surgeon. Dr. Kwong said his love of trauma care and surgery extends beyond his professional and military obligations. "We have operated together in the mountains of Guatemala, where people come from three days away to have surgery," she said. "But we found out we had to take turns being the boss when doing surgeries together."

Spending months away from family is a difficult part of military deployment, but Dr. Kwong recognizes Dr. Schreiber's commitment. "It's hard to say 'no' when someone says they're going to help take care of our soldiers, because they're the most deserving people," she said. "It's a part of who he is now."