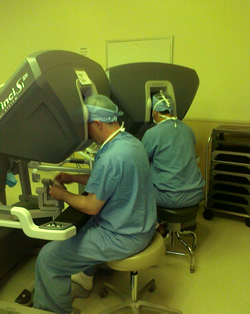 “For urogynecology, it’s been a quantum leap for patients,” said Dr. Gregory. “Patients were typically going home in three to four days after a major abdominal incision, and now they’re going home in 24 to 30 hours.”

The difference between the surgery he performed in July and a traditional laparoscopy, said Dr. Gregory, is the improved articulation made possible by the robotic arms in the Da Vinci system. They allow a surgeon to place stitches deep in the pelvis “exactly as I would in an open procedure.”

Another technological difference in the system OHSU uses is the stereoscopic vision afforded by a scope for each eye – essentially mimicking the difference between seeing a movie and seeing a 3-D movie.

The use of a dual console has positive implications for training residents and fellows. In traditional robotic surgery, one of the surgeons is seated at the console, while the other surgeon is at the bedside. Verbal communication takes place, but if a demonstration at the console is warranted, the surgeons need may need to temporarily halt the procedure and change places.

Now, a patient-side cart with four robotic arms is connected to the two consoles – one arm is for the camera and three arms carry out the surgeon’s movements. Sitting side-by-side, the surgeons can switch control of the robotic arms with the touch of a button. 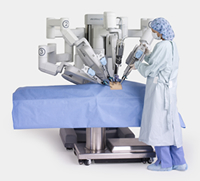 “Suddenly you’re working as a team. I can more seamlessly transition between doing the manipulations with my own hands and switching it to the other surgeon’s hands,” said Dr. Gregory. “If necessary, I can quickly and efficiently take back control and give the resident or fellow immediate feedback.”

OHSU is developing a curriculum that will meet the training requirements for Intuitive Surgical – the manufacturer of the Da Vinci system – and take advantage of the teaching environment inherent in an academic health center.

The future is wide open for robotic surgery. Technology like the Da Vinci system could potentially be designed for remote surgery to link health centers like OHSU to underserved communities. “If you have audio and visual communication,” said Dr. Gregory, “an OHSU faculty member could theoretically do surgery in eastern Oregon from right here on campus.”