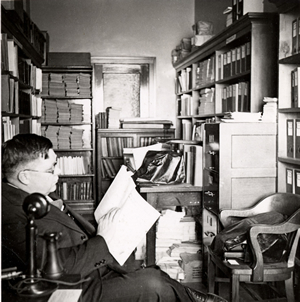 The opening line of a biography written by the late Arthur C. Jones, MD (1896-1983) reads, "Education in the Pacific Northwest owes a large debt to Dr. Olof Larsell. The University of Oregon Medical School in particular bears the imprint of his influence. He contributed in many ways to the present high standing of the School and gave of his energy to support higher education throughout the State of Oregon."

Olof Larsell, born in 1886 in Rättvik, Sweden, was an ardent scholar of history, a clinical researcher, professor and a true mentor and friend of students and colleagues. He once said that there was only one thing he would rather be than a physician, a teacher of physicians.

Dean Richard B. Dillehunt appointed Larsell as full professor in anatomy at the young school (1921-1952). In 1923, he formed a Medical History Club for faculty and student assistants and held many of the meetings in his own home.

A steady enthusiasm is contagious, and many students could attest to the fact that Dr. Larsell gave them the first impetus toward real accomplishment. His credo might well be summarized in his own oft repeated quotation, "In all thy getting, get understanding."

Known for his enduring energy, Larsell was working on the final chapter of his monumental monograph on the cerebellum and other unfinished neurological research when he died at 78 years of age on April 8, 1964.