Carlos Siekavizza arrives at OHSU via Guatemala, Norway and Virginia 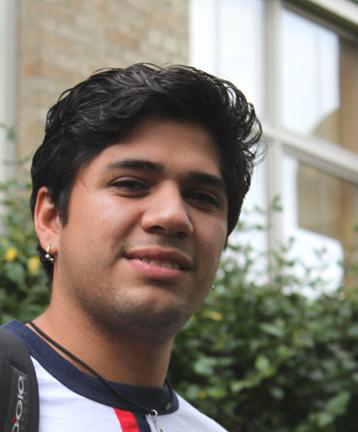 Born and raised in the city of Quetzaltenango in a mountainous region of Guatemala, Carlos Siekavizza moved to Guatemala City at age 11. He attended and completed high school there, and was encouraged by family and friends to apply for further secondary education through United World Colleges (UWC).

“I was accepted,” he said, “and ended up in high school in Norway. It was amazing – there were students from 83 countries in our school and we had a fjord in front of our classroom.”

Carlos obtained a second diploma from the UWC and moved once again – this time to the US – to continue his education. He majored in Biochemistry and Molecular Biology and minored in French at the University of Richmond in Richmond, Va., while working for three of his four undergraduate years in a research lab that investigated DNA lesion and repair. “That was my steering point into research,” he said. “I started to get really interested.”

Carlos worked for two years in a herpes virology lab at Virginia Commonwealth University to be sure that his interest in research was long-lasting. “I wanted to be certain that this was something I could do for the rest of my life,” he said. His self-described nomadic lifestyle led him to the Pacific Northwest, “largely because the area is similar to Norway and my hometown on Guatemala. When I saw the Department of Microbiology and Immunology at OHSU, I knew this was where I wanted to be.”

Now enrolled as a PhD candidate in the Program in Molecular and Cellular Biosciences (PMCB), Carlos draws on his international experiences to broaden his scientific thinking. “I am used to being an outsider in unfamiliar situations,” he said. “You need to bring your own perspective to an issue but also remember that those around you may have different approaches.”

His travels have also taught him that science is a universal language. “People the world over use science to solve the problems of daily living and survival. It is a great vehicle for bridging differences and improving cultural understanding.”