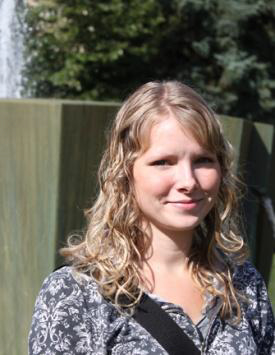 A family situation she describes as “just not functional” presented Jeannie Hunnicutt with some unique challenges in her early schooling.

"My home life was exceptionally unstable until sixth grade," she said. "I switched elementary schools at least 12 times, and missed a large part of third and fourth grade entirely."

Now a PhD candidate in the Neuroscience Graduate Program, she credits some exceptional teachers in her middle and high schools with helping her overcome her childhood barriers.

“By the time I reached eighth grade my reading level was absurdly low,” she said. “I was very fortunate to have teachers around me who took me in and helped. One of them, Miss Alina Jensen, was a phenomenal hands-on science teacher. She took us camping, and had us performing tests on water and learning astronomy by looking at the stars, not at a book. When I got an A in her class I realized that I could do something well.”

Jeannie pushed herself in that summer between eighth and ninth grade and arrived at high school with most of her reading barriers behind her. But the route to a research career was still elusive. “I still thought that if you were interested in science then you were automatically a pre-med,” she said. “I was enrolled at a college where research had a low profile. I just didn’t see it as an alternative.”

A National Student Exchange program that sent her to Montana State University in Bozeman proved to be the key that unlocked her future. “I saw more research there than I had ever seen before and I knew that this was what I wanted to do.” Even in her pre-med days, Jeannie had always been drawn to the nervous system. Now she started to investigate the fields of cognitive and developmental neuroscience.

Cognitive neuroscience allowed her to pursue her passion for studying the role of activity in the development of the nervous system, but was rooted in computers and data analysis.
Developmental neuroscience, with its study of the first differentiation of pain and temperature receptors, offered her hands-on experiences similar to those that had so transformed her life back in the eighth grade. Could they be studied together?

“I realized that the Vollum Institute combines these fields in its study of the molecular basis of activity in the nervous system,” she said. “This is where I wanted to be a graduate student.”

The recipient of a scholar award from the Portland Chapter, Achievement Rewards for College Scientists (ARCS) Foundation, Jeannie knows that the next five years will be challenging, but she describes herself as stubbornly persistent. “I’m independent and motivated, and I’m looking forward to the work ahead,” she said. “After my PhD, I would like to continue to pursue research, which means a life of constantly learning new things. It's very likely that I will teach as well, and I can only hope that I will be as effective and inspiring as some of the teachers I had along the way.”