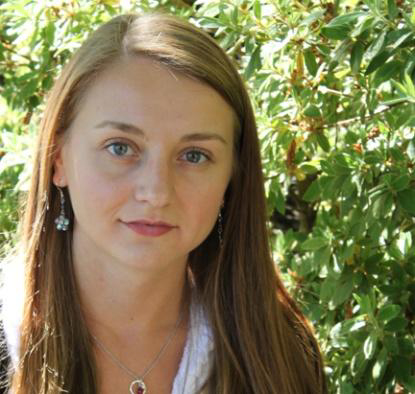 When University of Oregon freshman Maria Purice applied for a lab assistant position seeking someone who “could tolerate awful smells and squirming maggots,” she didn’t realize she was also embarking upon a career choice that would someday land her in the OHSU Neuroscience Graduate Program.

Born into a family of nine children, Maria Purice’s parents emigrated from Romania when she was 11 years old, eventually settling in Portland. “I know it sounds like a cliché, but we arrived with $1,000 in our pockets,” she said. “My parents worked multiple cleaning and service jobs to bring in an income. It took great courage on their part to bring us to the United States – I’m very proud of them.”

Maria attended Centennial High School in Gresham, Ore., where she played on the varsity basketball and volleyball teams and became editor-in-chief of the school newspaper. She was accepted into the Honors College at the University of Oregon, initially as a double major in journalism and biology. An ambitious student, she had always been moved by the sight of people in wheelchairs and already had her eyes on medical school. “From the age of seven I wanted to be a doctor,” she said. “I have always wanted to help people who suffer from neuro-degenerative diseases like Parkinson’s.”

When she was accepted into the lab of Chris Doe, PhD, a Howard Hughes Medical Institute (HHMI) Professor, she became intrigued by how fly eggs evolved and challenged by questions such as, “How does the brain of a fruit fly develop?” She began to see alternative ways to help people through science. This was only the beginning of the journey into neuroscience for Maria.
As she transitioned from cleaning lab equipment to conducting full-on research in her sophomore year, Maria began to seriously consider a scientific career over becoming a family physician. A summer internship at the HHMI’s Janelia Farm Research Campus in Ashburn, Va., cemented the deal.

“I started going to neuroscience lectures,” she said of her internship in Ashburn. “Soon I realized that if we can understand how the nervous system forms, maybe we can understand why things break and how to fix them.”

By the time she graduated from the University of Oregon in 2009, she had reached a turning
point, deciding neuroscience research, not family medicine, would become the focus of her
passion to help people. She pursued several graduate schools, preferring to study on the West
Coast near her family; so when she met with researchers at OHSU and discovered they were
investigating the sciences she was most interested in, it seemed like a perfect fit. She was
accepted into the Neuroscience Graduate PhD Program.

Maria will spend time this fall in the Nicolson lab, directed by Teresa Nicolson, PhD, studying the molecular basis of hearing and balance in zebrafish. Looking into the future, she plans to study spinal cord injuries and eventually wants her own lab.

“I want to be excited about what I am doing,” Maria said optimistically. “Even when
experiments don’t work!”