Falling in love with chromosomes 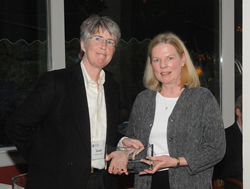 A 1984 graduate of the PhD program, Susan B. Olson, PhD, Professor, Department of Molecular & Medical Genetics, was unsure how she would use her undergraduate biology degree. While studying at Lewis & Clark College in Portland she took an embryology course from a visiting OHSU professor who taught the subject from a genetics perspective.

“When I came near to completing my senior year, I called and asked his advice on labs where I could volunteer,” she said. “He immediately made arrangements for me to volunteer in one of the genetics labs at OHSU.”

Not knowing what to expect, Dr. Olson arrived at OHSU some weeks later to discover that she was entering the lab of Ellen Magenis, MD, who was herself a Resident (’68) and Fellow (’71) of OHSU, and a pioneer in the field of clinical cytogenetics and medical genetics. “Dr. Magenis took me under her wing. I fell in love with chromosomes and eventually became one of her graduate students.”

It was Dr. Magenis who encouraged Dr. Olson to appreciate the role of clinician-scientist long before the term became widespread. “She took me into the clinic and away from the bench,” she said, “and told me, ‘Remember the patients for whom you are trying to make a difference. Value them, respect them, because they are part of you and your work.’ I will never forget that.”

A continuously NIH-funded investigator since 1994, Dr. Olson is internationally known for her work in human cytogenetics. She has been repeatedly recognized by community groups and OHSU students and faculty for her teaching. The author of over 90 peer-reviewed articles, she is also prominent in Oregon’s nationally-recognized program to study the cellular and molecular basis of Fanconi anemia. Her lab offers research services for traditional and molecular chromosomal analysis of a variety of mammals to investigators at OHSU and all across the country.

“Dr. Olson runs arguably one of the top cytogenetics laboratories in the world,” said Susan Hayflick, MD, Professor and interim Chair, OHSU Department of Molecular & Medical Genetics. “If you’ve taken care of a patient with cancer; if you’ve had a child in the past 30 years; if you have taken care of any children with birth defects or with developmental or growth problems, then you’ve benefited from her work.”

Dr. Olson has also been a committed member of the School of Medicine Alumni Association. She has served in almost every leadership position, including Council President, in a continuous term of service extending to nearly 15 years.

“I’ve had many decision points at which it is traditional to move on, but at each decision point there was no place better than OHSU in my field,” she said. “I feel so lucky to have been able to live my career here, and to be a recipient of the Alumni Association’s award given in Dr. Richard Jones’ name. He was a treasured teacher, mentor and colleague.”

The School of Medicine Alumni Association annually recognizes distinguished alumni in three fields: leadership, lifetime achievement and science. Susan B. Olson, PhD, was the recipient of the Richard T. Jones, MD, PhD Distinguished Alumni Scientist Award for 2010. The award honors a graduate of the School of Medicine’s Masters or Doctor of Philosophy degree programs who displays continued research excellence, service to the scientific community, and/or contributions to basic science education.