With 15 of Oregon’s 36 counties containing geographic Health Professional Shortage Areas for primary care, the need for family medicine physicians in rural Oregon is clear. Each year, eight physicians enter the workforce after finishing the Cascades East Family Medicine Residency Program, armed with the broad knowledge a successful rural physician needs. These physicians are applying their skills where they’re most needed: Cascades East graduates who remain in Oregon are nearly five times as likely as their metro-area counterparts to settle in communities with populations of 10,000 or less. 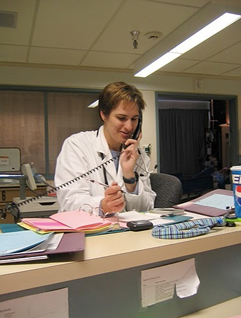 “One of our biggest successes is the fact that we’ve graduated about 85 residents, most who end up practicing in Health Professional Shortage areas,” said Rob Ross, MD, Cascades East Program Director and Associate Professor, Department of Family Medicine. “One of the reasons this program started was because the Klamath Falls area was in such desperate need of primary care physicians.”

Placement in the Cascades East program is highly selective – over 1,000 medical school graduates typically apply for eight slots each year. OHSU administers and co-sponsors the program, which is also supported by Sky Lakes Medical Center and Oregon Area Health Education Centers. OHSU offers 776 training slots for graduate medical education (GME), and 52 percent of the residents who graduate from these programs remain in the state; only nine other states in the nation have better in-state retention of GME graduates.

Studies have shown residents are more likely to practice in a setting similar to where they trained, a trend reinforced by the Cascades East program – the only MD residency outside the Portland area.

“We get to take advantage of our selection bias. The people who choose to train in smaller, community-based hospitals are already more likely to be on a path toward rural practice,” said Joyce Hollander-Rodriguez, MD, Cascades East Associate Program Director and Assistant Professor, Department of Family Medicine. “Our job is to give them the training and skills to be successful and prepared, so that they can stay in those environments.”

The program emphasizes a wide range of training to give a physician the skills needed to practice in a small town. “Being a resident here is like the jack of all trades,” said Kristi Coleman, MD, a second-year resident. “The breadth of training includes surgical procedures, geriatric care, pediatrics, psychiatric care, and emergency medicine. I can’t think of a sector of medicine we haven’t experienced.”

People in Klamath Falls and the surrounding communities often have poor access to primary care, so besides the training that takes place at Sky Lakes Medical Center – the town’s 176-bed community hospital – the Cascades East program has expanded to include satellite clinics in outlying areas and a mobile health clinic, which is driven several times a month to local homeless and women’s shelters.

“What’s highlighted here is the importance of community medicine. We’re not treating individuals, we’re treating a community,” said Dr. Coleman. “When I see my patients at the grocery store, it’s a way for them to realize we’re on their side.”

The program also places residents in frontier community rotations in Burns, Reedsport and Lakeview, where, as Dr. Ross said, they experience what it’s like to provide “about 95 percent of the medical care in town.”

“I feel connected to the community in a way that I simply would not in a larger city,” said Jerry Flynn, MD, a third-year resident. “One of the biggest misconceptions about rural medicine is that you have to be raised in a small town to want to practice in one.”

Dr. Ross said he can foresee the Cascades East program expanding to 10 or 12 residents a year. “We need that,” he said. “But we have challenges, like getting enough community and hospital support, and attracting good faculty to move here.”

"Oregon and OHSU both recognize that a huge portion of the state’s population doesn’t have access to medical care," said Dr. Coleman. “OHSU created this residency to train providers interested in filling that need.”