Clinician-filmmaker gives patients the tools to tell their own stories 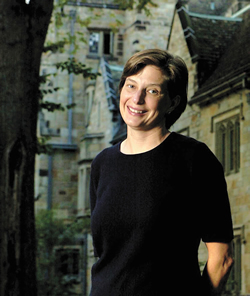 A graduate of Wilson High School in Southwest Portland and Pomona College in Claremont, Calif., Dr. Berland moved to Boston after obtaining her undergraduate degree to work on the NOVA series at WGBH - first as unpaid intern, then as production assistant and finally as associate producer. She picked up her first Emmy at the age of 23, for a NOVA program on the race to build the first superconductor. A 1991 series on the health care crisis, this time for MacNeil/Lehrer Productions, resulted in her second Emmy. She was 28, and a career as a filmmaker looked secure.

Security is not, however, the essential ingredient in Dr. Berland’s life. “Parts of my life have really been about taking risks and learning to feel comfortable with uncertainty,” she said.

Health care was in her genes through her father, John Berland, MD ‘68, and she had never fully ruled it out for herself. Despite serious misgivings about her formal qualifications she decided to apply to OHSU - the nearest medical school to her family home. “OHSU focused primarily on my abilities and motivation for medicine,” she said. “They believed in me and accepted me.”

It turned out to be a good match. “I loved OHSU,” she said. “I loved every single rotation: I loved surgery, I loved pediatrics, I loved psychiatry, I loved medicine. Instilling a genuine love of medicine is a great gift that OHSU gives to its medical students - and in my experience, it is not at all that common.”

Her background as a filmmaker would prove to be a gateway to better understanding of the needs of her patients. One of her rotations involved psychiatric assessment of troubled teens in a juvenile justice program. “I realized that I had no idea how they lived, what their lives were like outside of the exam room,” she said. “I needed those insights in order to treat them properly, but they could not share freely and openly in the clinical environment.”

Instead, she gave them video cameras to record their daily experiences. “Institutions tend to define people in one dimension,” she said, “and there is sometimes a discord between how the system sees them and how they see themselves. Looking at the footage they shot gave me three-dimensional insights into their lives. For example, one very troubled teen took the camera through his entire house and all that he videotaped were the pictures of him and his family when they were children. That told me a lot.”

She continued to build on this experience with participant-filmed video through her residency at Barnes Hospital in St. Louis, Miss., and her appointment as Associate Professor, Department of Internal Medicine at Yale University School of Medicine. Her approach reached its widest audience with her 2004 documentary, Rolling, which tells - sometimes in uncomfortably intimate detail - the stories of three individuals who use wheelchairs. The film was shown on PBS as well as in national and international film festivals and garnered awards from the Film Society of New York and the Lake Placid Film Festival. It also brought her to the attention of the MacArthur Foundation, which recognized her as one of 24 MacArthur Fellows that year.

Now with teaching responsibilities at Yale, she continues to encourage her students and residents to find ways to probe deeper in search of a better understanding of their patients’ situations. But it’s not a role she finds easy to adopt.

“It’s very hard to be a good mentor: a good role model to your residents, to your medical students, to your staff, to your patients,” she said. “I draw on all the memories of mentors I had at OHSU to help me try do this in my life as a physician now.”


The School of Medicine Alumni Association annually recognizes distinguished alumni in three fields: leadership, lifetime achievement and science. Gretchen Berland, MD ‘96, was the recipient of the Esther Pohl Lovejoy, MD, Leadership Award for 2010. This award honors a School of Medicine graduate who demonstrates exceptional leadership and service to the medical profession on a national or international level.