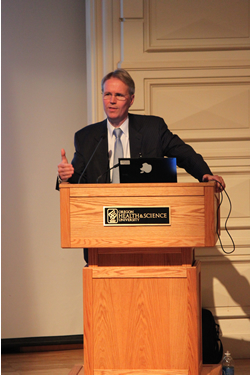 David B. Hellmann, MD, MACP, Aliki Perroti Professor of Medicine at the Johns Hopkins School of Medicine, was the guest speaker at the 2010 Benson/Kendall Annual Visiting Professorship. In his lecture titled, “New Model for Academic Medical Centers,” he said medicine is a “public trust” and urged caregivers to build stronger relationships with patients and their communities in a way that strives more for personalized care.

Speaking to an audience at the OHSU auditorium, Dr. Hellman referred to the academic “triangle” model of research, education and patient care, and explained how this model revolutionized medicine in the 19th century, helping bridge the gap between the best and the worst trained doctor, as well as advancing scientific discovery.

While the triangle served the 19th century population well, Dr. Hellmann argued that current medical issues, such as chronic disease and longevity, as well as an explosion of science, require renewed thinking of this model in order for academic medical centers to respond more effectively to today’s challenges.

He pointed out that as a country, much of the funding for research has been allocated for individual disease investigation, which often results in patient-focused care getting pushed aside. “People want cures for diseases like Alzheimer’s, but at the same time they want their doctors and nurses to work together. They want their health systems to be safe and convenient,” said Dr. Hellmann. He emphasized that patients also want close relationships with their physicians, but cautioned this is not always the case.

Dr. Hellmann suggested that while the core building blocks of the 19th century model remain sound, it is time for the traditional two-dimensional triangle model to get an upgrade, replaced by a three-dimensional pyramid that puts the patients, family and community at the apex. “By putting all of them at the top of our pyramid we remind ourselves that a key element of success at academic medical centers is that everyone is reaching for excellence,” said Dr. Hellmann. 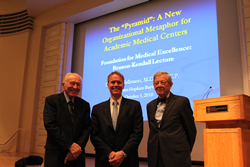 Describing a pyramid as a prism where “no wall stands on its own” and that each wall “stands only to the degree that it is buttressed by the other two,” Dr. Hellmann encouraged stronger collaboration between disciplines. “We have the best chance to increase dividends to society if we are able to increase collaboration, particularly at the interface of disciplines,” he said.

Finally, he pointed to culture as the base of his new pyramid model, where patients might come to expect more from their caregivers. “I often felt the triangle made me feel important, but I wasn’t sure it made the nurses, the respiratory therapists and everyone else feel important,” said Dr. Hellmann. “If we succeed, we can walk anywhere on campus and ask any employee ‘do you feel you are part of something important?’ and have them say ‘yes.’”

ABOUT THE BENSON/KENDALL ANNUAL VISITING PROFESSORSHIP

The Benson/Kendall Annual Visiting Professorship started in 1996 as a lectureship. It was founded by The Foundation for Medical Excellence to honor the outstanding years of two former deans of the OHSU School of Medicine: John A. Benson, MD, and John W. Kendall Jr., MD.

A sustained increase in community support over the years enabled it to become a visiting professorship in 2009 focusing on contemporary issues in education.