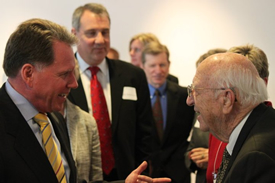 "How much progress could we make if the smartest people in the world turned their attention to the poorest?"

William Gates Sr. addressed this and other questions as the keynote speaker at the Portland Chapter, Achievement Rewards for College Scientists (ARCS) Foundation Scholars' Lunch, held in downtown Portland on Oct. 19.

In a talk entitled "Making a Difference: The Value of Philanthropy in Education," Mr. Gates described grant programs at the Bill and Melinda Gates Foundation that seek to engage the brightest scientific minds in solving chronic health and infrastructure problems in the developing world. A key element of this strategy is the Foundation’s 2003 publication of ten Grand Challenges in Global Health, modeled on German mathematician David Hilbert’s 23 problems in mathematics, which were published in 1900 and have stimulated innovation in mathematics ever since.

Start-up money from the Gates Foundation enabled the Portland ARCS Chapter to turn an initial $15,000 investment into $1.1 million in scholarship support over six years for students in science and engineering programs at OHSU and Oregon State University. Chapter President Caron Ogg announced a total of $963,250 in sponsored scholar awards to OHSU, shared by 63 students. The event was attended by Dean Mark Richardson, President Joe Robertson and many OHSU leaders who celebrated ARCS and scientific achievement.

“These are young people who see something that can be corrected,” said Mr. Gates in concluding his remarks. “We want them to be able to pursue that passion.”