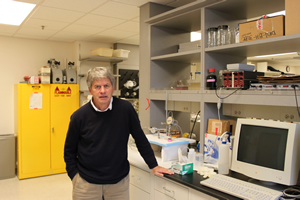 An international team led by John Bissonnette, MD, Professor, Department of Obstetrics & Gynecology, and Professor Julian FR Paton, PhD, at the University of Bristol in the UK, revealed that they were able to halt the potentially lethal, breath holding episodes associated with Rett syndrome by using a unique combination of drugs.

Rett syndrome is an autism spectrum disorder caused by a mutation in the MeCP2 gene, which is found on the X chromosome. The progressive neurological disorder, which steadily worsens as time passes, causes mental retardation and developmental regression, including loss of hand movements, slowed brain and head growth, problems with walking, seizures, and intellectual disability. Rett syndrome affects around 1 in 10,000 girls.

Additionally, some patients suffer from episodes of intermittent breath holding, which puts them at risk of asphyxiation and possible brain damage.

Dr. Bissonnette, a co-principal investigator on the paper said, “A common and disturbing feature of Rett syndrome is the occurrence of cessation of breathing, often with breath holding. We found that when the phrenic nerve going to the diaphragm was silent, nerves going to muscles for expiration were excessively active.”

Building on earlier studies that had shown a defect in inhibitory neurotransmitters in the brain's respiratory areas in a mouse model of Rett syndrome, Dr. Bissonnette reasoned that increasing inhibition to these expiratory nerves would correct the apneas. “When we increased the amount of aminobutyric acid, or separately used a serotonin receptor activator that is known to quieten expiratory neurons, the pattern of breath cessation was markedly improved,” he said.

While the specific drugs used in this mouse study are not available for human use, drugs with similar modes of action have been used in other conditions, and according to Dr. Bissonnette, may be beneficial to patients. “Our hope is that patients with Rett syndrome and possibly other breathing disorders will benefit from our findings.”

The study was funded by an International Rett Syndrome Foundation grant and March of Dimes Foundation grant and published in the Proceedings of the National Academy of Sciences. The paper is titled "Correction of respiratory disorders in a mouse model of Rett syndrome."


Pictured: Dr. Bissonnette in his lab