From the Archives: What are you trying to do, Jones . . . get a hundred? 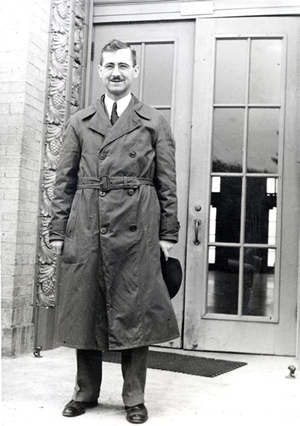 Arthur Carhart Jones, undaunted by the snide remarks made by classmates at the University of Oregon Medical School (precurser to the OHSU School of Medicine), would answer back, “You’re doggoned right I am – what are you trying to get?”

A.C. Jones was born in 1896 in Oberlin, Ohio, son of a traveling missionary. In his autobiography, Jones recounted, “We were held to a standard a notch or two above that of the mill run of our playmates. Tough.” No stranger to hard times, Jones worked his way through high school, college and medical school. He received a BA from Pacific University (1921), an MA in anatomy (1925) and an MD (1926) from Northwestern University Medical School in Chicago.

Dr. Jones entered private practice in Portland in 1927, opening the first and only physiatrist office in the state. He taught physical medicine as a volunteer faculty member at the University of Oregon Medical School (UOMS) for 40 years (1929-1969) and was professor of anatomy for nine of those years (1931-1940).  He was awarded a scholarship to Northwestern University to attend the first course in physical medicine for physicians. After returning, Dean Dillehunt invited him to teach physical medicine, not yet a specialty at UOMS.

Among his many accomplishments, Dr. Jones was nationally known for his pioneer work in physical medicine and rehabilitation therapy; he was Medical Director and founder of the Rehabilitation Institute of Oregon and was among the original organizers of the Oregon Chapter of the Arthritis and Rheumatism Foundation.

Dr. Jones was named Doctor of the Year by the Multnomah County Medical Society and was given a degree of Humane Letters by Pacific University.